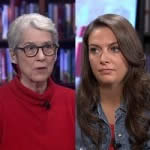 Today’s Democracy Now! special looks at the growing movement of people calling on President Trump to resign over multiple claims of sexual harassment and assault. The renewed calls come amid the international #MeToo movement, involving women across the world.

Meet the Women Who Accuse Trump of Sexual Harassment & Are Calling for Congress to Investigate
Today’s Democracy Now! special looks at the growing movement of people calling on President Trump to resign over multiple claims of sexual harassment and assault. The renewed calls come amid the international #MeToo movement, in which women across the world have come forward to accuse a slew of powerful men of sexual harassment, assault and rape. Meanwhile, three of the 16 women who have publicly accused Trump of sexual harassment held a press conference last month in New York, demanding that Congress take action. The women shared accounts in which they said Trump groped, fondled and forcibly kissed them. Samantha Holvey is a former Miss USA contestant for North Carolina when Trump owned the pageant. Jessica Leeds describes what happened to her when she encountered Donald Trump in the first-class cabin of a commercial flight in 1979.

Constitutional Lawyer John Bonifaz on the Growing Movement to Impeach Trump
As some say the movement to impeach President Trump will grow stronger in 2018, this fall a half-dozen Democrats introduced articles of impeachment against Trump, accusing him of obstruction of justice and other offenses. In December, the House rejected the effort, even as 58 Democrats voted in support of the resolution—nearly a third of their caucus. Meanwhile, at least 17 communities around the country are on record calling for impeachment proceedings against Donald Trump.

Duty to Warn: Psychiatrists and Mental Health Experts Assess the “Dangerous Case” of President Trump
This segment revisits an interview with someone who’s led a discussion of mental health professionals who are deeply concerned about President Trump’s psychological instability. Dr. Bandy Lee is a forensic psychiatrist on the faculty of Yale School of Medicine who organized the “Duty to Warn” conference at Yale and edited the best-selling book, “The Dangerous Case of Donald Trump: 27 Psychiatrists and Mental Health Experts Assess a President.”