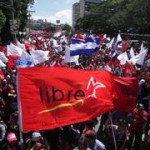 In Honduras, the government-controlled electoral commission on Sunday declared U.S.-backed incumbent President Juan Orlando Hernández as the official winner of the contested November 26 presidential election, while opposition candidate Salvador Nasralla was traveling to the United States to present evidence of election fraud.

“All Eyes on U.S.” as Honduran Election Panel Declares Incumbent President Hernández Election Winner
In Honduras, the government-controlled electoral commission on Sunday declared U.S.-backed incumbent President Juan Orlando Hernández as the official winner of the contested November 26 presidential election. The commission made the announcement while opposition candidate Salvador Nasralla was on a plane traveling to the United States to present evidence of election fraud. The opposition party has called for nationwide protests on Monday, while the Organization of American States has called for a new election.

“CorkerKickback?”: Sen. Supports Tax Bill After Last-Minute Provision Would Personally Enrich Him
The Republican plan to overhaul the U.S. tax code is now one step closer to passing, after Tennessee Republican Senator Bob Corker abruptly switched his position and announced his support for the controversial bill. The surprise move came after a controversial last-minute addition to the bill that would personally enrich Corker. The provision would slash taxes on income from real estate LLCs; Corker is a real estate mogul. The New York Times reports those who will most benefit from the Republicans’ tax bill are big corporations, multimillionaires, private equity managers, private schools, liquor stores, lawyers, tax accountants and President Trump and his family. Meanwhile, Florida Senator Marco Rubio announced his support for the tax plan on Friday after an expansion to the child tax credit—even though the expansion won’t benefit the children of undocumented parents. Republican lawmakers are now pressing forward for a final vote on Trump’s tax plan this week.

Kali Akuno: Tax Bill is One of Greatest Transfers of Wealth from Working Class to Rich in History
Republican lawmakers are pressing forward on a final vote on President Trump’s tax plan, which would shower billions of dollars upon the wealthiest Americans, including Trump and his family members. The New York Times reports those who will be most hurt by the tax plan include the elderly, low-income families, immigrants, people buying health insurance, the island of Puerto Rico and homeowners in the states of New York, New Jersey and California. The Congressional Budget Office estimates 13 million Americans are projected to lose their health insurance under the plan. It will also impose a new requirement that families must provide a Social Security number to claim the child tax credit—meaning many undocumented parents will no longer be able to receive this credit even if their children are U.S. citizens.

Net Neutrality Advocates on Next Steps After FCC Vote: “This Fight is Far from Over”
Last week, the Federal Communications Commission, known as the FCC, voted to dismantle landmark “net neutrality” rules established in 2015 after widespread organizing and protests by free internet advocates. These rules required internet service providers to treat web content equally and not block or prioritize some content over others in return for payment. The repeal of these rules was widely opposed by the American public, with more than 20 million people submitting comments to the FCC. Thursday’s vote also means the government will no longer regulate high-speed internet as if it were a public utility, like phone service.