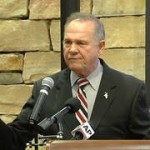 Democrat Doug Jones and Republican Roy Moore are locked in a tight and increasingly controversial race to fill the Alabama Senate seat left vacant by Attorney General Jeff Sessions. The election is on Tuesday. A Democrat hasn’t won a U.S. Senate race in Alabama for 20 years.

On Eve of Alabama Senate Election, a Look at Roy Moore’s Racism, Homophobia & Religious Fanaticism
Democrat Doug Jones and Republican Roy Moore are locked in a tight and increasingly controversial race to fill the Alabama Senate seat left vacant by Attorney General Jeff Sessions. The election is on Tuesday. A Democrat hasn’t won a U.S. Senate race in Alabama for 20 years. Polling shows the two candidates are neck and neck, despite Moore being accused by at least nine women of sexually harassing or assaulting them when they were teenagers. President Donald Trump has repeatedly endorsed Roy Moore, including on Friday, when he held a rally in Pensacola, Florida, which is 20 miles from the Alabama border and in the same media market as Mobile, Alabama. Roy Moore has had a long and highly controversial political career in Alabama that’s been marked by racism, homophobia, Islamophobia and religious fanaticism. Over the weekend, the Doug Jones campaign orchestrated a massive get-out-the-vote effort, particularly targeting African-American voters. A number of prominent African-American politicians, including New Jersey Senator Cory Booker, Alabama Congressmember Terri Sewell and former Massachusetts Democratic Governor Deval Patrick, all campaigned for Jones over the weekend.

Black Leaders Boycott Trump Photo Op at Civil Rights Museum: “Why Should Our Legacy Be Tarnished?”
In Mississippi, many black community leaders boycotted the opening of two new civil rights museums on Saturday in protest of President Donald Trump’s presence. Those who boycotted the events included African-American Democratic Congressmembers John Lewis of Georgia and Bennie Thompson of Mississippi, who wrote in a joint statement, “President Trump’s disparaging comments about women, the disabled, immigrants, and National Football League players disrespect the efforts of Fannie Lou Hamer, Aaron Henry, Medgar Evers, Robert Clark, James Chaney, Andrew Goodman, Michael Schwerner, and countless others who have given their all for Mississippi to be a better place.” Both NAACP President Derrick Johnson and Jackson Mayor Chokwe Antar Lumumba boycotted some of Saturday’s events in protest of Trump’s presence, which Johnson called “an affront to the veterans of the civil rights movement.”

NAACP Head: Roy Moore Is Using Racial and Religious Fearmongering to Sway White Alabama Voters
As Alabama’s special Senate race on Tuesday nears, criticism is mounting over Republican Roy Moore’s refusal to step down from an increasingly tight race meant to fill the Alabama Senate seat left vacant by Attorney General Jeff Sessions. Moore was twice ousted as Alabama’s chief justice—first in 2003 for refusing to remove a monument of the Ten Commandments in the rotunda of the Alabama Judicial Building. After being re-elected, he was again ousted in 2016, for ordering his judges to defy the U.S. Supreme Court’s ruling legalizing marriage equality. He was a proponent of Trump’s racist and discredited “birther theory” about President Obama. He has compared homosexuality to bestiality. He said Minnesota Congressmember Keith Ellison shouldn’t have been allowed to be sworn into Congress using a Qur’an, which he compared to “Mein Kampf.” In 2011, Roy Moore proposed eliminating all constitutional amendments after the 10th, which includes amendments prohibiting slavery and the amendments giving women and African Americans the right to vote.

Amid Worst Winter Wildfires in California History, Farmworkers Are Laboring in Hazardous Air
In California, drought-fueled wildfires raged toward Southern California’s coastal cities over the weekend. The fires have scorched some 230,000 acres of land and forced nearly 200,000 people to evacuate. At least one woman has died so far. The wildfires are already the fifth largest on record in California history. Climate experts say the intensity of the winter blazes is linked to climate change. Authorities have warned residents to stay inside because of the dangerous air quality caused by smoke and carcinogenic ash from the fires. But a number of farms have stayed open, sparking concerns that farmworkers are laboring in hazardous conditions without proper equipment. Last week, volunteers handing out free protective masks to farmworkers say they were kicked off some farms, despite the fact that the pickers were asking for the safety equipment.