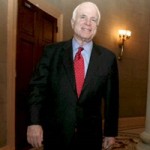 John McCain, the Vietnam veteran and former prisoner of war, six-term senator and two-time presidential candidate, died Saturday at the age of 81 of brain cancer. Democracy Now! hosted a roundtable discussion on his life and legacy.

Obit Omit: What the Media Leaves Out of John McCain’s Record of Misogyny and Militarism
John McCain, the Vietnam veteran and former prisoner of war, six-term senator and two-time presidential candidate, died Saturday at the age of 81 of brain cancer. Democracy Now! hosted a roundtable discussion on his life and legacy. Mehdi Hasan is a columnist for The Intercept and host of their “Deconstructed” podcast. He’s also host of “UpFront” at Al Jazeera English. He’s been tweeting in response to McCain’s death and wrote a piece last year headlined “Despite What the Press Says, ‘Maverick’ McCain Has a Long and Distinguished Record of Horribleness.” Other guests are Medea Benjamin, co-founder of CodePink, which McCain once referred to as “low-life scum,” and Norman Solomon, national coordinator of RootsAction, executive director of the Institute for Public Accuracy and author of “War Made Easy: How Presidents and Pundits Keep Spinning Us to Death.”

Sanders Backers Win Major Reforms as Democratic Nat’l Committee Votes to Limit Superdelegate Power
After a major debate, Democrats have voted on a key progressive demand after the 2016 campaign: to vastly reduce the power of superdelegates in choosing the party’s presidential nominee. Saturday’s vote by the Democratic National Committee comes after the 2016 race for Democratic nominee between Senator Bernie Sanders and former Secretary of State Hillary Clinton, and pitted many DNC members who supported the change against two former party chairs and members of the Congressional Black Caucus. Norman Solomon is national coordinator of RootsAction. He was a Bernie Sanders delegate from California to the 2016 Democratic National Convention, where he coordinated the independent Bernie Delegates Network.

Pope Asks Forgiveness for Clergy Sex Abuse Scandal as New Letter Says He Knew, But Failed to Act
Pope Francis marked the first papal visit to Ireland in 39 years by acknowledging the failure by church authorities to address child abuse crimes by the clergy. But Sunday, Pope Francis faced a new bombshell accusation from a former top-ranking Vatican official who called on him to resign, releasing a 7,000-word letter claiming the pope knew about allegations of sex abuse by high-ranking Cardinal Theodore McCarrick years before they became public, and failed to punish him. McCarrick faces allegations that he coerced men training to become priests into sexual relationships and abused a teenage altar boy. Pope Francis has refused to comment on the accusations. Peter Isely is a survivor of childhood sexual assault by a Wisconsin priest, and a founding member of the Survivors Network of those Abused by Priests. Thomas Doyle is a former priest and longtime supporter of justice and compassion for clergy sex abuse victims. They’re both part of the organization Ending Clergy Abuse.