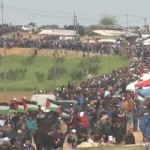 At least 18 Palestinians have died in Gaza after Israeli forces opened fire Friday on a protest near the Gaza Strip’s eastern border with Israel, also wounding as many as 1,700. 30,000 Gaza residents had gathered as part of a planned 6-week-long nonviolent protest against the blockade.

Massacre in Gaza: Israeli Forces Open Fire on Palestinians, Killing 18, Wounding As Many As 1,700
At least 18 Palestinians have died in Gaza after Israeli forces opened fire Friday on a protest near the Gaza Strip’s eastern border with Israel. As many as 1,700 Palestinians were wounded. The deaths and injuries came as 30,000 Gaza residents gathered near the wall, as part of a planned 6-week-long nonviolent protest against the blockade of Gaza and to demand the right of return for Palestinian refugees. The protests began on Friday, March 30, known as “Land Day,” marking the anniversary of the 1976 killing of six Palestinians protesting the Israeli confiscation of Arab land. Video posted online shows unarmed Palestinians being shot in the back while taking part in Friday’s protest. Another 49 Palestinians were injured by Israeli forces on Saturday. Israel’s actions have been condemned around the world, but Israel is rejecting calls to investigate the killings. At the United Nations, the U.S. blocked a move by the U.N. Security Council to open an investigation.

Starvation Wages Are a “Crime”: Lessons from MLK & 1968 Memphis Sanitation Strike, 50 Years Later
This week, commemorations are being held to mark the 50th anniversary of the assassination of Dr. Martin Luther King Jr. The civil rights leader and peace activist was gunned down April 4, 1968, on the balcony of his hotel room at the Lorraine Motel in Memphis, Tennessee. He was just 39 years old. King was in Memphis to support striking sanitation workers, who he saw as being on the front lines of fighting poverty and integral to his new initiative, the Poor People’s Campaign. “It is a crime for people to live in this rich nation and receive starvation wages,” King told people in Memphis shortly before his death. In the late 1960s, King recognized that the next phase in the quest for civil rights and equality would focus on the economic divide.

From 1968 Memphis Sanitation Strike to Teachers’ Strikes in OK & KY Today, Workers Demand a Voice
This is Part 2 of the conversation about Rev. Martin Luther King Jr.’s role in the 1968 Memphis sanitation workers’ strike, 50 years after his assassination, with William “Bill” Lucy, former secretary-treasurer with AFSCME, and H.B. Crockett, one of the striking sanitation workers in 1968. Crockett worked for the Memphis Sanitation Department for 53 years before retiring. Bill Lucy played a key role in the 1968 Memphis strike and is president emeritus of the Coalition of Black Trade Unionists.