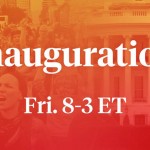 Democracy Now!’s live inauguration day broadcast, which included reports from the protests and a panel with Keeanga-Yamahtta Taylor, Ralph Nader and Naomi Klein.