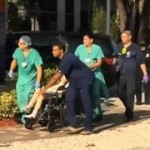 Authorities in Florida have obtained a search warrant to investigate the deaths of eight elderly residents at a nursing home in Hollywood in the aftermath of Hurricane Irma. The victims ranged in age from 71 to 99 years old.

Deregulated & Unaccountable: For-Profit Nursing Homes in Florida Face Scrutiny After Irma Deaths
Authorities in Florida have obtained a search warrant to investigate the deaths of eight elderly residents at a nursing home in Hollywood in the aftermath of Hurricane Irma. The victims ranged in age from 71 to 99 years old. They died in the Rehabilitation Center at Hollywood Hills after a transformer was knocked out following the hurricane, causing the nursing home’s air conditioning unit to shut down. Authorities say that the administrators of the nursing home were aware that the air conditioning unit had failed, and that they installed fans and portable air coolers inside the facility. But the remedies did little to protect the residents from the sweltering heat. At 3 a.m. on Wednesday morning, one nursing home resident was rushed to the emergency room of Memorial Regional Hospital, a Level I trauma center just down the street. By 5 a.m., when the hospital received a third rescue call, some hospital workers went down the street to check on the nursing home. They found a situation so critical, the hospital sent in more than 50 medical workers under a mass casualty protocol. At least 150 people were evacuated, many with severe dehydration and other heat-related symptoms..

The Forgotten Americans: Why Did U.S. Media Ignore U.S. Virgin Islands Devastated by Irma?
Hurricane Irma made landfall in the U.S. Virgin Islands as a Category 5 storm just over one week ago, knocking out electricity and running water, and cutting off communications with the outside world. Now, Governor Kenneth Mapp says the islands of Saint John and Saint Thomas are still nearly entirely without power. The hurricane also destroyed schools and the main hospital on Saint Thomas. The devastation was so extensive, it can be seen from space. Earlier this week, a U.S. military amphibious ship arrived on Saint Thomas laden with equipment and supplies. The islands have also received emergency aid from residents of the nearby island of Puerto Rico, where volunteers banded together to collect supplies and transport them on dozens of ships. But while Hurricane Irma hit the U.S. Virgin Islands days before it made landfall on the Florida Keys, the Virgin Islands have been largely forgotten in the wall-to-wall U.S. media coverage of the storm. And that omission is even more striking given that the U.S. Virgin Islands are in the midst of celebrating their centennial as U.S. territory.

South Asia: 1,300 Dead, 40 Million Impacted in Climate Change-Linked Flooding
In South Asia, more than 41 million people have been battling severe floods and displacement. More than 1,300 people have died in Bangladesh, India and Nepal in recent months, after the region was hit by the worst flooding in at least 40 years. Some 40 million more people have seen their homes, businesses or crops destroyed. In the coming decade, devastating floods are expected to increase as changing weather patterns worsen risks in the region, climate researchers say. Flooding accounted for 47 percent of all weather-related global disasters between 1995 and 2015, the United Nations Office for Disaster Risk Reduction said in a report. Of the 2.3 billion people affected, 95 percent were in Asia.