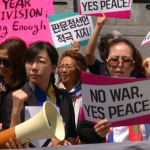 President Trump has canceled plans for a June 12 summit with North Korean leader Kim Jong-un. A top official in North Korea’s foreign ministry said Friday that Kim Jong-un is still willing to meet with Trump at any time and that the cancellation of the summit was “extremely regrettable.”

As Trump Pulls Out of N. Korea Summit, Women Activists Head to DMZ to Promote Korean Peace Process
President Trump has canceled plans for a June 12 summit with North Korean leader Kim Jong-un. A top official in North Korea’s foreign ministry said Friday that Kim Jong-un is still willing to meet with Trump at any time and that the cancellation of the summit was “extremely regrettable.” In a letter to Kim, Trump cited Kim’s “tremendous anger and open hostility” in recent comments as his reason for canceling the talks. Trump went on to write, “You talk about nuclear capabilities, but ours are so massive and powerful that I pray to God they will never have to be used.” Trump sent the letter just hours after North Korea declared it had destroyed one of its nuclear weapons test sites. According to a report from NBC, the decision was made so abruptly the Trump administration did not have time to notify congressional leaders or foreign allies, including South Korean President Moon Jae-in.

“It Is About Bloody Time”: Harvey Weinstein Assault Survivor Reacts to Arrest in NYC on Rape Charges
The former Hollywood mogul Harvey Weinstein has surrendered to police this morning, as a Manhattan prosecutor brings charges that Weinstein sexually assaulted two women. His bail is expected to be set at $2 million. Law enforcement officials said Weinstein would be charged with first-degree rape and third-degree rape in one case, and with first-degree criminal sex act in a second. It’s the latest stunning development in Weinstein’s downfall, which rocked Hollywood and helped spark a global movement of women coming forward to accuse men of rape, sexual assault and sexual harassment. Part of the New York case stems from the accusations of former aspiring actress Lucia Evans, who says Weinstein sexually assaulted her back in 2004. In total, more than 100 women have come forward to accuse Weinstein of rape, sexual assault and sexual harassment, in cases that stretch back decades.

Bill Cosby Rape Survivor Says Black Women Face Disproportionate Pressure Not to Speak Out on Assault
Harvey Weinstein surrendered to police Friday, facing charges that he sexually assaulted two women. His arrest comes just one month after the public downfall of another extremely powerful man in entertainment—comedian Bill Cosby. Cosby was convicted of three counts of aggravated indecent assault for drugging and sexually assaulting Andrea Constand in 2004. She was the former director of operations for the women’s basketball team at Temple University. Like Weinstein, Cosby has been accused of rape and sexual assault by dozens of women, also in cases stretching back decades. The 80-year-old comedian is now facing up to 30 years in prison and will be sentenced later this summer.