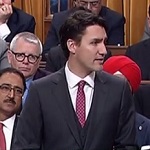 Canadian Prime Minister Justin Trudeau formally apologized this week for the 1914 Komagata Maru incident in which Canada turned away a Japanese steamship in order to prevent more than 370 Indians, including Sikhs, Muslims and Hindus, from immigrating to the country. The incident is the subject of a new documentary, Continuous Journey. 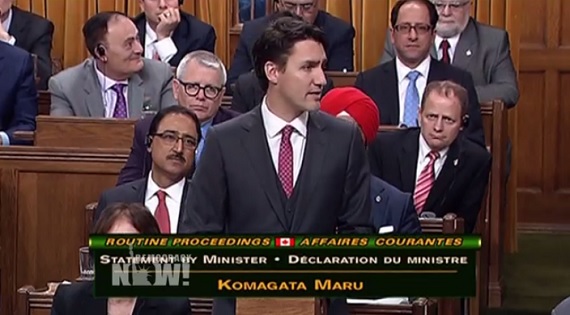 A moment 102 years in the making. Image: video still

Today’s show is broadcast from Toronto, Canada. Canadian Prime Minister Justin Trudeau formally apologized this week for the 1914 Komagata Maru incident in which Canada turned away a Japanese steamship in order to prevent more than 370 Indians, including Sikhs, Muslims and Hindus, from immigrating to the country. The move was widely acknowledged to be aimed at keeping Indians out of Canada. Then premier of British Columbia, Sir Richard McBride, said at the time, “And we always have in mind the necessity of keeping this a white man’s country.”

The incident is the subject of a new documentary, Continuous Journey. The film’s director, Ali Kazimi, spoke to Amy Goodman:

AMY GOODMAN: Why was it called “continuous journey”?

ALI KAZIMI: You had to come by continuous journey from your country of nationality or origin. And this was specifically designed for South Asians, because, remember, at that time Canada was part of the British Empire, and what the imperial authorities were worried about is that if Canada denied British—fellow British subjects, Indians, the right to enter, India would go up in flames. This was a very real fear. So a policy had to be designed that was veiled. So, Mackenzie King, who later became Canada’s one of the longest-standing prime ministers, designed a policy which said you just had to come by continuous journey. It made no mention of race or nationality, and that—therein lies its brilliance. And therefore, it’s been ignored by historians as being an instrument of racial exclusion.

Also, last month, First Nations people occupied the offices of Canada’s indigenous affairs department to demand action over suicides as well as water and housing crises in their communities. The protests came after the Cree community of Attawapiskat declared a state of emergency over attempted suicides. Protesters set up occupations inside and outside the offices of Indigenous and Northern Affairs Canada in Toronto, Regina, Winnipeg and Gatineau, Quebec. Among those who took part in the occupation of the office here in Toronto were local Black Lives Matter activists who just weeks earlier had launched a 15-day encampment outside police headquarters following news there would be no criminal charges for the police officer who fatally shot a South Sudanese refugee named Andrew Loku last July. Among those who turned out in force at the encampment outside Toronto police headquarters were First Nations activists.