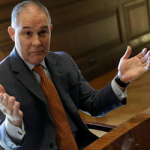 The EPA is facing a major new scandal after it worked with the White House to bury an alarming federal study detailing widespread chemical contamination of the nation’s water supply. One Trump administration official warned release of the study would create a “public relations nightmare.”

Trump’s EPA Doesn’t Want You to Know Chemicals in Teflon Are Poisoning Waterways & Firefighters
The Environmental Protection Agency is facing a major new scandal after it worked with the White House to bury an alarming federal study detailing widespread chemical contamination of the nation’s water supply. One Trump administration official warned release of the study would create a “public relations nightmare.” The study found chemicals commonly present in Teflon and firefighting foam are a threat to human health at levels the EPA had previously called safe. Robert Bilott is the attorney the New York Times calls the the “worst nightmare of DuPont,” the manufacturer of Teflon. He successfully won compensation for his clients whose drinking water had been contaminated by toxic chemicals used to make Teflon. He is a recipient of the 2017 Right Livelihood Award.

Whistleblower Daniel Ellsberg: Civil Disobedience Against Vietnam War Led Me to Leak Pentagon Papers
Whistleblower Daniel Ellsberg was a high-level defense analyst in 1971 when he leaked a top-secret report on U.S. involvement in Vietnam to The New York Times and other publications that came to be known as the Pentagon Papers and played a key role in ending the Vietnam War. Ellsberg speaks about the recent 50th anniversary of one of the most famous acts of civil disobedience in the United States. On May 17, 1968, Catholic priests and activists broke into a draft board office in Catonsville, Maryland, and stole 378 draft cards and burned them in the parking lot as a protest against the Vietnam War. They became known as the Catonsville Nine. Ellsberg discusses the role nonviolent direct action can play in social movements. Ellsberg says that the ending of the war in Vietnam “relied on a lot of people doing unusual things.”

Daniel Ellsberg: Whistleblowing is Needed to Avert Catastrophic U.S. War with Iran & North Korea
Whistleblower Daniel Ellsberg is best known for leaking information about U.S. involvement in the Vietnam War in 1971, but he also drafted plans for nuclear war as a consultant to the Department of Defense and the White House as detailed in his book, “The Doomsday Machine: Confessions of a Nuclear War Planner.” He discusses nuclear war, North and South Korea and Iran. He says Trump withdrawing from the Iran nuclear deal has “no imaginable benefit to anybody, except for those mad men who want to see Iran destroyed,” referring to Israeli Prime Minister Benjamin Netanyahu and Saudi Arabia.