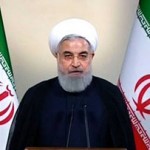 Tension is mounting between Israel and Iran in Syria. On Thursday, Israel bombed dozens of Iranian targets inside Syria in the largest attack by Israel since fighting began in Syria in 2011. Israeli authorities said the attack was in response to Iranian forces firing 20 rockets at Israeli forces in the Israeli-occupied Golan Heights.

Trump Withdrew from Iran Nuclear Deal. Now Israel May Be Trying to Provoke War
Tension is mounting between Israel and Iran in Syria. On Thursday, Israel bombed dozens of Iranian targets inside Syria in the largest attack by Israel since fighting began in Syria in 2011. Israeli authorities said the attack was in response to Iranian forces firing 20 rockets at Israeli forces in the Israeli-occupied Golan Heights. Israeli Prime Minister Benjamin Netanyahu said Iran had “crossed a red line,” though Israel has offered no evidence the rocket attacks were carried out by Iran. Earlier today, Iran’s Foreign Ministry said Israel’s claim about an Iranian rocket attack is “freely invented and baseless.” Meanwhile, more evidence is emerging that it was Israel—not Iran—that began the escalation this week. The New York Times reports an Israeli missile strike on Wednesday hit a village in the Syrian Golan Heights. The Syrian Observatory for Human Rights also reports Israel carried out a missile strike on Tuesday near Damascus, killing at least 15 people, including eight Iranians. That strike occurred just hours after President Trump announced the United States would pull out of the Iran nuclear agreement.

Laleh Khalili: Palestinian “Gandhis” Are Marching Every Day for Freedom from Israeli Apartheid
For the seventh week in a row, Palestinian protesters are gathering in Gaza near the Israeli border as part of an ongoing nonviolent protest called the Great March of Return. Since the protests began, Israeli forces have killed at least 47 Palestinians and wounded nearly 7,000. The protests are leading up to a massive rally next week timed to mark the 70th anniversary of the Nakba, known as the Day of Catastrophe to Palestinians, when more than 700,000 Palestinians were forced to flee or were expelled from their homes.

If Gina Haspel Is Confirmed at CIA, the U.S. Would Be Giving Other Nations Green Light to Torture
Former Vice President Dick Cheney said Thursday that the U.S. should restart torture interrogation tactics. Cheney’s comment comes a day after President Trump’s nominee to head the CIA, Gina Haspel, repeatedly refused Wednesday to call the CIA’s post-9/11 treatment of prisoners “torture,” and declined to state whether she believes torture is immoral. Haspel’s prospects for confirmation remain in doubt, after Republican senators Rand Paul of Kentucky and John McCain of Arizona issued statements opposing her nomination.

Black Mama’s Bail Out Is Freeing Black Women from Jail for Mother’s Day & Taking Aim at Cash Bail
It’s Mother’s Day this weekend, and racial justice groups around the country are bailing black women out of jail so they can spend the holiday with their families. For the second year in a row, “Black Mama’s Bail Out Day” is raising money to bail out as many black women from jail as possible. The effort is taking place in dozens of cities to call attention to the injustice of cash bail.

Immigration Officials Are Using Pseudoscience to Justify Jailing Teenage Asylum Seekers with Adults
This week, the Trump administration announced it will detain asylum seekers and separate them from their children at the border. A case in California shows how some minors who arrived alone to seek asylum have been put in adult detention. Immigration authorities in California are refusing to release an Afghan asylum seeker from an adult detention center, even though a federal court had determined he is a child. His lawyers say the teenager, who has been held in adult detention for five months, is 17 years old. But ICE used a disputed “pseudoscience” age test based on a dental exam to insist he is over 18. The teen, who uses the name Hamid for privacy and protection, says he fled Afghanistan using a forged passport after the Taliban murdered his father. On Tuesday, Hamid spoke to Democracy Now! in his first phone interview from the Mesa Verde detention center in Bakersfield, California.