Less than two weeks after Honduran environmental activist Berta Cáceres was murdered, another indigenous environmentalist, Nelson García, has been killed. 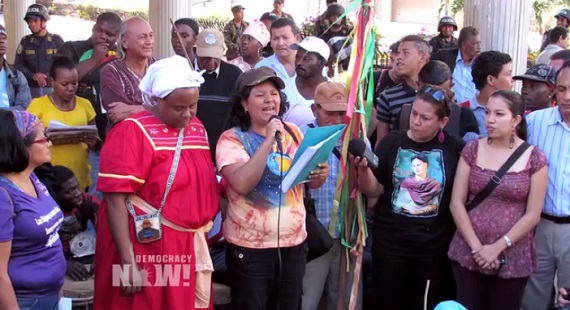 Less than two weeks after Honduran environmental activist Berta Cáceres was murdered, another indigenous environmentalist has been killed. Nelson García was shot to death Tuesday after returning home from helping indigenous people who had been displaced in a mass eviction by Honduran security forces. García was a member of COPINH, the Civic Council of Popular and Indigenous Organizations of Honduras, which Cáceres had founded.

Honduran police have said the two killings are unrelated, but activists disagree and have now mobilized to demand justice for Berta Cáceres and an end to what they say is a culture of repression and impunity linked to the Honduran government’s support for corporate interests.

Also on today’s show, there is an update on the water poisoning story in Flint, Michigan, as governor Rick Snyder testifies before Congress. Protests are growing, and filmmaker Michael Moore is asking fans to sign a petition on his website calling for the immediate resignation and arrest of Governor Snyder.