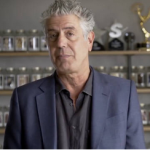 Celebrity chef and television presenter Anthony Bourdain has died by suicide. The 61-year-old was found dead in his hotel room in Strasbourg, France, where he was filming an episode of his CNN program “Parts Unknown.”

As EPA Scandals Mount, Scott Pruitt Is Radically Reshaping Agency to Aid Polluters and Big Business
Environmental Protection Agency Administrator Scott Pruitt is again facing a slew of ethics and spending scandals amid mounting calls for his resignation. On Thursday, The Washington Post reported Pruitt enlisted members of his $3.5 million security detail to pick up his dry cleaning and search for his favorite skin moisturizing lotion, even though federal rules prohibit public officials from receiving gifts from subordinates, including unpaid services. Meanwhile, Pruitt is continuing to radically reshape the EPA. The New York Times reports today the EPA has given the chemical industry a big victory by scaling back the way the federal government determines health and safety risks associated with the most dangerous chemicals on the market. Pruitt has also been accused of radically reshaping the EPA rulemaking process and weakening Obama administration efforts to tighten fuel economy standards.

Israeli Military Pushes Misleading Video in Attempt to Smear Slain Palestinian Medic Razan al-Najjar
In Gaza, thousands of Palestinians have resumed protests against the Israeli blockade. Israeli soldiers have killed at least 119 Palestinians and wounded more than 13,000 more since the Palestinians’ nonviolent Great March of Return protests began on March 30. A week ago today, Israeli forces shot dead Palestinian medic Razan al-Najjar as she was helping evacuate wounded Palestinians at a protest near the separation fence between Israel and Gaza. At the time of her killing, she was wearing a white medical coat and a medical ID card. The following day, thousands of people poured into the streets of Gaza to attend her funeral. Her killing has also sparked international outrage. Earlier this week, the Israeli military said Israeli snipers had not intentionally shot at Razan. But the Israeli military is now facing widespread criticism after it released a short video Thursday, that was heavily edited, in efforts to claim the slain medic was acting as a “human shield” for Hamas when she was shot dead by an Israeli sniper exactly one week ago.

After Trip to Gaza, Anthony Bourdain Accused World of Robbing Palestinians of Their Basic Humanity
Celebrity chef and television presenter Anthony Bourdain has died by suicide. The 61-year-old was found dead in his hotel room in Strasbourg, France, where he was filming an episode of his CNN program “Parts Unknown.” During one episode of his show, he traveled to Gaza. In 2014, he won an award from the Muslim Public Affairs Council. In his acceptance speech, he said, “The world has visited many terrible things on the Palestinian people, none more shameful than robbing them of their basic humanity.”

Kathy Kelly on Afghanistan: Destitution, Unemployment & Hunger Must Be Addressed to Achieve Peace
Afghan President Ashraf Ghani has announced an unconditional ceasefire with the Taliban to last until June 20. The ceasefire comes after Muslim clerics in Afghanistan issued a fatwa—or religious ruling—against suicide bombings, after an attack Monday, claimed by ISIS, killed 14 people who had gathered for a clerics’ peace summit in Kabul. This comes as the BBC is reporting that the number of bombs dropped by the U.S. Air Force has surged dramatically since President Trump announced his Afghanistan strategy and committed more troops to the conflict last August; new rules of engagement have made it easier for U.S. forces to carry out strikes against the Taliban.

As U.S. Intensifies Airstrikes in Afghanistan, Pashtun Men Stage 400-Mile Walk Calling for Peace
Extended conversation with Kathy Kelly, co-coordinator of Voices for Creative Nonviolence, a campaign to end U.S. military and economic warfare. She has made many trips to Afghanistan, and just returned from a trip this week. Kelly’s latest article for The Progressive is headlined, “Afghans, Parched for Water, March for Peace.”