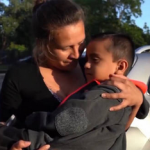 More 2,300 children have been separated from their families at the U.S.-Mexico border after their parents were charged with illegal entry under the Trump administration’s ongoing “zero tolerance” policy. The Intercept has a new report on one of the first reunifications.

Immigrant Parents Search for Children Snatched by Gov’t at the Border, But Reunification Is Rare
More 2,300 children have been separated from their families at the U.S.-Mexico border after their parents were charged with illegal entry under the Trump administration’s ongoing “zero tolerance” policy. As concerns grow about poor coordination between Customs and Border Patrol, which takes the children, and the Office of Refugee Resettlement, which puts them into detention and foster care, The Intercept has a new report on one of the first reunifications. Journalist Debbie Nathan speaks about a Guatemalan woman whose 5-year-old son was taken from her last month by immigration authorities in Texas after she sought asylum, and has been reunited with him after 38 days in detention.

Investigation: Substandard Medical Care in ICE Detention is Killing Immigrants, Endangering Lives
Human Rights Watch has a new report that exposes dangerously substandard medical care in ICE detention facilities around the country and reveals that more people died in immigration detention in fiscal year 2017 than any year since 2009. Physicians reviewed 15 deaths in immigration detention from December 2015 to April 2017, determining that substandard medical care contributed or led to eight of the 15 deaths. “What we found is ICE, the agency that’s detaining now 40,000 people… and wants to expand, cannot provide adequately for the safety of the people that it holds,” says Clara Long, senior researcher at Human Rights Watch. She’s the author of the report “Code Red: The Fatal Consequences of Dangerously Substandard Medical Care in Immigration Detention.”

ICE Detention is “Soul-Destroying”: Eritrean Immigrant Dies by Suicide After U.S. Deports Him
An Eritrean man took his own life after being deported from the United States earlier this month. Zeresenay Ermias Testfatsion died by suicide at the Cairo International Airport. He was 34 years old. Testfatsion sought asylum in the United States in 2017, fleeing violence in Eritrea. He spent more than a year detained in South Florida and Ohio before he was deported. Friends and family are demanding to know why he was deported to Eritrea, despite his fears that he would be tortured or even killed there. Christine Ho founded a volunteer visitation program that provides support for immigrants and asylum-seekers inside Broward Transitional Center, the immigrant detention center in South Florida where Testfatsion was jailed for more than a year.