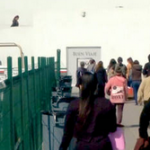 On Monday, Attorney General Jeff Sessions announced that domestic and gang-related violence will generally no longer be grounds for asylum, a far-reaching shift that could affect thousands of people, particularly women from Central America fleeing gender-based violence.

Lawyer: Jeff Sessions’ Attacks on Migrant Domestic Violence Survivors Drags U.S. Back to “Dark Ages”
On Monday, Attorney General Jeff Sessions announced that domestic and gang-related violence will generally no longer be grounds for asylum, a far-reaching shift that could affect thousands of people, particularly women from Central America fleeing gender-based violence. This decision reverses the Board of Immigration Appeals’ grant of asylum to a Salvadoran domestic violence survivor known as A.B., who fled to the U.S. for her life after surviving 15 years of beatings, rape and death threats from her husband. In ruling against A.B., Sessions also overturned a groundbreaking precedent from 2014 in which the immigration appeals court affirmed that domestic violence survivors are deserving of protection.

U.S. Withdrawal from Human Rights Council “Imminent” After U.N. Condemns Israel for Gaza Massacre
The Trump administration will reportedly withdraw the United States from the U.N.’s Human Rights Council. Reuters reports the decision is “imminent” and comes after the U.N. General Assembly voted 120 to 8 on Wednesday to condemn Israel over its massacre of Palestinians protesting nonviolently against Israel’s occupation.

Blistering U.N. Report: Trump Administration’s Policies Designed to Worsen Poverty & Inequality
A group of top Democrats are demanding the Trump administration present a plan to Congress to address growing poverty in the United States, following an excoriating report by the United Nations special rapporteur on extreme poverty, Philip Alston. Alston slammed the Trump administration’s policies for worsening the state of poverty in the United States. The report details how 40 million Americans live in poverty, and 18.5 million Americans live in extreme poverty. It also details how the United States has the highest rate of income inequality among Western countries and one of the lowest rates of intergenerational social mobility.

Rev. William Barber: U.S. Policies on Healthcare, Poverty Are Immoral & a Threat to Democracy
The release of the U.N. report on extreme poverty in the United States comes amid a nationwide, weeks-long direct action campaign known as the new Poor People’s Campaign, aimed at fighting poverty and racism in the United States. Nearly 2,000 people have been arrested around the country since the campaign began in March, 50 years after Rev. Martin Luther King Jr. launched the first Poor People’s Campaign.

Rev. William Barber: Jeff Sessions Using Religion to Justify Family Separations Is “Biblical Heresy”
More than 300 Catholic bishops have blasted the Trump administration’s immigration policies, calling for an end to the separation of migrant children from their parents and condemning Attorney General Jeff Sessions’s policy of ending the right of domestic violence survivors to seek asylum in the United States. On Thursday, Sessions quoted the Bible to justify his department’s immigration policies. Sessions was speaking to an invitation-only crowd in Fort Wayne, Indiana. “I would cite you to the Apostle Paul and his clear and wise command in Romans 13 to obey the laws of the government because God has ordained the government for his purposes,” stated Sessions. Critics seized on his reference to Romans 13, noting it was a favorite passage of defenders of the Confederacy used to justify slavery. We speak to the Rev. William Barber.