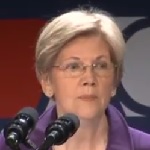 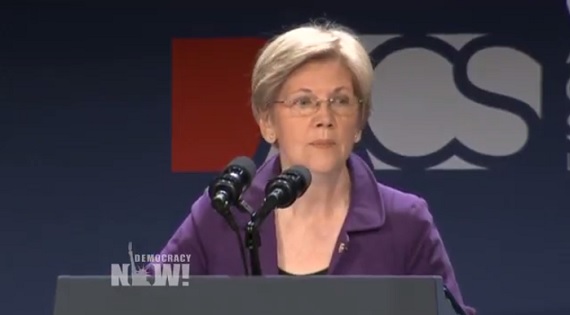 Kickass Senator Elizabeth Warren endorsing Clinton — and taking a well-aimed swipe at the Drumpf. Fe, this one’s for you. Image: video still

Sanders has said he wants the Democratic Party to adopt much of his platform at the Democratic National Convention, and has been allowed to appoint five people to the 15-member platform drafting committee, which met for the first time this week. The Sanders campaign was always “about building a force for change inside and outside the party,” notes Larry Cohen, senior adviser to Sanders, past president of Communications Workers of America and the first superdelegate for Bernie Sanders.

Amy Goodman is also joined by Michelle Chan, spokesperson for Friends of the Earth Action. She is working on recommendations for environmentalist and 350.org co-founder Bill McKibben, one of Sanders’ selections on the Democratic platform drafting committee.

Climate activists have delivered more than 90,000 petitions to the DNC demanding the party’s platform for the 2016 race include a nationwide ban on fracking, which Sanders has backed, while Clinton has focused on the need for regulating the industry.

On Thursday, California Secretary of State Alex Padilla said at least 2 million votes cast in California’s presidential primary election have yet to be counted. So far Hillary Clinton is leading Bernie Sanders by 440,000 votes. Larry Cohen, a superdelegate who came out for Sanders, discussed why the Sanders campaign is calling for major changes to how the Democratic Party holds its primaries.

Thousands have gathered in Louisville, Kentucky, hometown of Muhammad Ali, to mourn the death of one of the most iconic figures of the 20th century. Ali was considered by many to be the greatest boxer of all time, but he will also be remembered for his activism against racism and war. Former President Bill Clinton, comedian Billy Crystal and journalist Bryant Gumbel are expected to deliver eulogies. On Thursday, an estimated 14,000 attended Ali’s Islamic prayer service.

Muslim advocate Dalia Mogahed addressed the mourners, and she joined the show to discuss Ali’s life and legacy. “We are de-Islamicizing Ali” by praising his stances, but not giving credit to his faith which was “central to his worldview,” says Mogahed, the director of research at the Institute for Social Policy and Understanding, one of two Muslim members of President Obama’s faith advisory council.

After Republican presidential front-runner Donald Trump joined in praising Ali this week, Mogahed argues, “We can’t both love Ali and honor him, and say we should ban Muslims from America.”

Dave Zirin, sports editor for The Nation magazine, will attend Muhammad Ali’s funeral in his hometown of Louisville, Kentucky. Zirin recounts Ali’s activism against racism in the city and says, “[T]his funeral is, in so many respects, Muhammad Ali’s last act of resistance, because what he is doing is pushing the country to come together to honor the most famous Muslim in the world at a time when a presidential candidate is running on a program of abject bigotry against the Muslim people, and the other presidential candidate is somebody who has proudly stood with the wars in the Middle East.”

Zirin’s recent article in The Nation is called “‘I Just Wanted to Be Free’: The Radical Reverberations of Muhammad Ali.” He’s the author of the Ali-themed book, What’s My Name, Fool? Sports and Resistance in the United States.