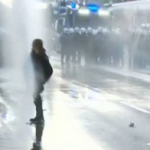 Mass demonstrations have erupted across Hamburg, Germany, as world leaders gather for the G20 summit, where Donald Trump is meeting with other world leaders. About 100,000 protesters took to the streets and have staged sit-ins in an attempt to disrupt the first day of the summit.

Dystopian Nightmare: Eyewitness Decries Police Repression at G20 Summit as 100,000 Take to Streets
Mass demonstrations have erupted across Hamburg, Germany, as world leaders gather for the G20 summit, where Donald Trump is meeting with other world leaders. About 100,000 protesters took to the streets and have staged sit-ins in an attempt to disrupt the first day of the summit. Police fired water cannons, pepper spray and stun grenades to disperse protesters. Key issues on the G20 agenda include climate change, trade and North Korea. Protesters who gathered say the G20 has failed to solve many issues, including climate change and global economic disparities. Philosopher Srecko Horvat is taking part in the G20 alternative summit, known as the Global Solidarity Summit. He is the co-founder of the Democracy in Europe Movement, also known as DiEM25.

Katrina vanden Heuvel: Now is Time for Trump & Putin to Negotiate, Not Escalate Tensions
Donald Trump is scheduled to meet with Russian President Vladimir Putin on Friday at the G20 summit in Hamburg, Germany. Their first official meeting comes as thousands of people have filled the streets around the G20 summit to demonstrate against globalization and Trump’s policies. Issues likely to be raised during their meeting include the war in Syria, North Korea, U.S. economic sanctions against Russia and nuclear weapons. Democrats are pushing Trump to confront Putin directly about the alleged Russian interference in the 2016 election. But during a press conference on Thursday from Poland, Trump cast doubt on whether he believes Russia interfered in the 2016 election.

Berta Cáceres’s Daughter Speaks Out After Surviving Assassination Attempt in Honduras
Last week, there was an attempted assassination on the life of Bertita Zúñiga Cáceres, the daughter of murdered Honduran indigenous and environmental leader Berta Cáceres. Bertita Zúñiga Cáceres was driving back with two colleagues from a community visit in central Honduras when a black pickup truck blocked their path. Three assailants jumped out of the truck and attempted an attack, but Zúñiga and her colleagues narrowly escaped. The incident comes just weeks after Zúñiga was named the new leader of the indigenous rights group Civic Council of Popular and Indigenous Organizations of Honduras (COPINH). She recently demonstrated in support of pending U.S. legislation to suspend U.S. military aid to Honduras. Her protest was a part of a week of action coordinated by the U.S.-based human rights group Witness for Peace.