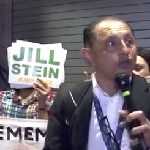 Former Secretary of State Hillary Clinton has made history by becoming the first woman to accept a major-party presidential nomination. However, protests continued to break out on the DNC floor as chants of “No more war” could be heard throughout the final night. Democracy Now! met up with one group of delegates from California just after they walked out. 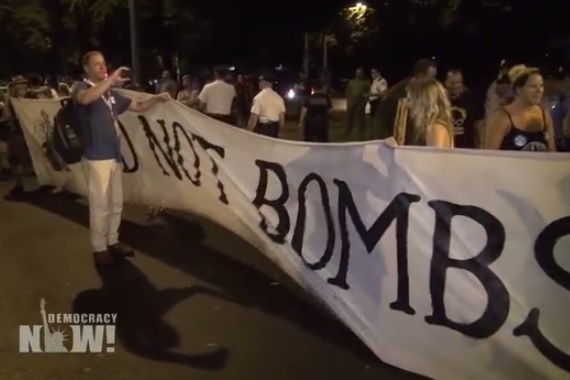 Former Secretary of State Hillary Clinton has made history by becoming the first woman to accept a major-party presidential nomination. “Tonight, we’ve reached a milestone in our nation’s march toward a more perfect union: the first time that a major party has nominated a woman for President,” Clinton said. “Standing here as my mother’s daughter, and my daughter’s mother, I’m so happy this day has come.”

Protests continued to break out on the floor of the Democratic National Convention, as chants of “No more war” could be heard throughout the final night. Scores of Sanders delegates wore fluorescent green shirts reading “Enough is Enough,” which appeared to glow in the dark whenever the arena lights dimmed in between speakers. Many delegates also held signs reading “Ban Fracking Now,” “#DNC Email Leaks” and “Jill Stein.” Democracy Now! met up with one group of delegates from California just after they walked out.

Amy Goodman spoke with Rebecca Traister, writer-at-large for New York Magazine who has covered Clinton for a decade. Her most recent article is headlined “Hillary Is Poised to Make the ‘Impossible Possible’—for Herself and for Women in America.” They were also joined by Kshama Sawant, a Socialist city councilmember in Seattle who helped win a $15/hour minimum wage for all workers in Seattle.

In our second hour of coverage of former Secretary of State Hillary Clinton’s historic speech at the Democratic National Convention, the show features excerpts of her address, along with LGBT rights activist Sarah McBride, who became the first openly transgender woman to speak at a major-party convention.

To discuss Hillary Clinton’s historic nomination and how the Black Lives Matter movement is reflected in the Democratic platform, Amy Goodman was joined by Keeanga-Yamahtta Taylor, author of “From #BlackLivesMatter to Black Liberation” and an assistant professor of African-American studies at Princeton University, and Janaye Ingram, the former executive director of the National Action Network and a member of the 20/20 Leaders of America.

On Wednesday night, Hillary Clinton’s running mate, Virginia Senator Tim Kaine, delivered a prime-time speech in which he spoke about the nine months he spent with Jesuit missionaries in Honduras in 1980. To talk more about the significance of Tim Kaine’s time in Honduras, we speak with Greg Grandin, professor of Latin American history at New York University. His most recent article for The Nation is headlined “Eat, Pray, Starve: What Tim Kaine Didn’t Learn During His Time in Honduras.”