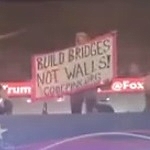 In a scene few would have predicted 12 or even six months ago, real estate mogul Donald Trump formally accepted the Republican presidential nomination. In an hour-and-15-minute speech, Trump warned the nation was facing an imminent crisis at home and abroad, and that he alone was qualified to solve it. CodePink’s Medea Benjamin disrupted the speech by holding up a banner reading “Build bridges, not walls!” 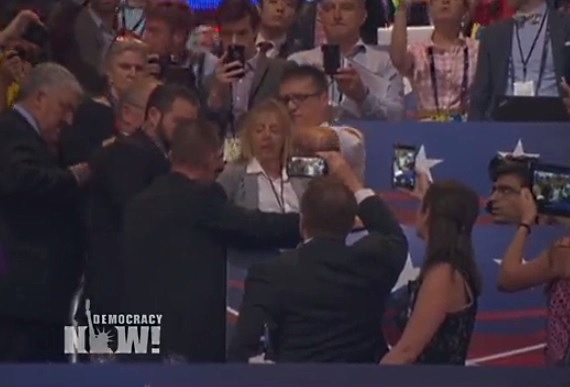 In a scene few would have predicted 12 or even six months ago, real estate mogul Donald Trump formally accepted the Republican presidential nomination. In an hour-and-15-minute speech, Trump warned the nation was facing an imminent crisis at home and abroad, and that he alone was qualified to solve it. Trump’s speech included so many factual inaccuracies that The Washington Post called it “a compendium of doomsday stats that fall apart upon close scrutiny. Numbers are taken out of context, data is manipulated, and sometimes the facts are wrong.” Amy Goodman spoke with three guests: David Cay Johnston, Pulitzer Prize-winning investigative reporter and author of the forthcoming book, “The Making of Donald Trump”; Jamil Smith, senior national correspondent at MTV News; and Vincent Warren, executive director of the Center for Constitutional Rights.

CodePink’s Medea Benjamin disrupted Donald Trump’s acceptance speech at the Republican National Convention by holding up a banner reading “Build bridges, not walls!” Her protest diverted cameras away from Trump’s speech. Benjamin was removed after the disruption and says she was later interviewed by the Secret Service. Democracy Now! spoke to her on the street afterwards.

For months Republican presidential nominee Donald Trump has been calling for a ban on Muslims entering the United States. Since he has risen to prominence, civil rights groups have cited increasing attacks and threats against Muslims in America, often against women wearing headscarves. Muslim groups are now campaigning to register a million new voters in a bid to keep Trump out of the White House. But some American Muslims will vote for Trump. According to a survey conducted by the Council on American-Islamic Relations, 11 percent of Muslims in the U.S. are Trump supporters.

The show hosted a discussion between two guests. Saba Ahmed is president of the Republican Muslim Coalition and a Donald Trump supporter. She recently met with Trump and his vice-presidential pick, Mike Pence, here at the Republican National Convention. We also speak with Aisha Samad, who is CAIR-Cleveland’s board secretary and a longtime activist in the Muslim community in Cleveland. Also appearing was Raed Jarrar, an Iraqi-born activist who works with the American Friends Service Committee.

This week’s Republican National Convention has taken place in the Q, which is short for the Quicken Loans Arena. We take a look at billionaire owner of Quicken Loans, Dan Gilbert. Gilbert owns casinos, is facing a pending lawsuit and has a reputation for launching attacks on journalists. Award-winning journalist Matt Taibbi explains that Quicken Loans, one of the country’s largest mortgage companies, was a “symbol” of the subprime mortgage crisis that decimated cities like Cleveland.

A group of young Cleveland activists gathered near the gates of the RNC to protest Republican Party priorities they say have decimated their city—economic policies that left thousands unemployed and blighted neighborhoods, racial discrimination that’s made Cleveland one of the most segregated cities in the U.S., and a police force that infamously shot dead African American Tamir Rice within two seconds of pulling up next to the boy as he held an airsoft BB gun.

On Thursday night, Paypal co-founder Peter Thiel made history by becoming the first speaker at a Republican National Convention to declare that he was “proud to be gay.” Thiel made headlines earlier this year when he confirmed to The New York Times that he personally spent $10 million to secretly fund a controversial lawsuit by wrestler Hulk Hogan against Gawker Media. Hogan sued the company for invasion of privacy after Gawker posted a sex tape, and in May a jury awarded the wrestler $140 million, forcing Gawker to declare bankruptcy. Thiel set his eyes on Gawker after the site published a 2007 article headlined “Peter Thiel is totally gay, people.”