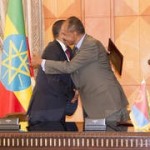 A historic peace deal between Ethiopia and Eritrea ends 20 years of a “state of war” that saw 70,000 killed and thousands of families separated. Responding are Ethiopian writer Awol Allo, a lecturer at the Keele University School of Law in the U.K., and Vanessa Berhe, an Eritrean human rights activist.

As Ethiopia & Eritrea Sign Deal to End 20 Years of War, Will Political Prisoners Be Released Next?
A historic peace deal between Ethiopia and Eritrea ends 20 years of a “state of war” that saw 70,000 killed and thousands of families separated. Responding are Ethiopian writer Awol Allo, a lecturer at the Keele University School of Law in the U.K., and Vanessa Berhe, an Eritrean human rights activist. She founded the group One Day Seyoum, which campaigns for the release of her uncle, Eritrean photojournalist Seyoum Tsehaye, who was imprisoned in 2001 amid a crackdown on free expression.

Migrant Children Detained in Shelters Being Drugged, Told Not to Hug, Forced to Bathe in Sinks
The Trump administration has less than a week to meet a court-ordered deadline to reunite children and parents separated at the U.S.-Mexico border under its “zero tolerance” policy. This comes as advocates say some migrant children have been released from federally contracted shelters with scabies and lice. In Illinois, officials are investigating the Chicago nonprofit Heartland Alliance over allegations it housed children separated from their parents at the border, with many of the children reportedly suffering abuse and neglect.

Salvadoran Mother Reunited with 3-Year-Old Son Says He Shows Signs of Trauma & Aggressive Behavior
On Wednesday, Democracy Now!’s Laura Gottesdiener sat down with a Salvadoran mother named Belqui Yessenia Castillo Cortez, who reunited with her 3-year-old son Michael last week after they were separated by immigration officials at the border in Texas. Federal documents show the mother and son arrived at the legal port of entry in Rio Grande City on May 28, 2018, to apply for asylum in the United States. Immigration authorities detained them and then separated them, sending Belqui to the Port Isabel Detention Center in Texas, while her 3-year-old son was flown all the way to New York and held in a facility run by a human services agency called Abbott House. “His behavior is really aggressive,” she says. “He wasn’t like this before. … He’s violent, more than anything else.”

Psychologists: Migrant Parents Reunited with Detained Children Must Brace for Trauma & Long Recovery
Nancy Burke, psychoanalyst and a co-chair of the Psychotherapy Action Network, which helped publish a pamphlet aimed at helping immigrant parents separated from children, discusses the psychological impacts family separation has on young children. She’s on the faculty with the Chicago Center for Psychoanalysis and Feinberg School of Medicine at Northwestern University and says the trauma children are experiencing in detention “freezes them in time” and takes away their ability to express themselves.