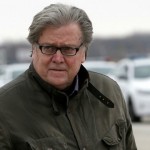 The battle between Donald Trump and the press escalated Thursday after one of Trump’s top advisers called the media the opposition party. In a rare interview with The New York Times, Trump’s chief strategist, Steve Bannon, said, “The media should be embarrassed and humiliated and keep its mouth shut and just listen for a while.”

The battle between Donald Trump and the press escalated Thursday after one of Trump’s top advisers called the media the opposition party. In a rare interview with The New York Times, Trump’s chief strategist, Steve Bannon, said, “The media should be embarrassed and humiliated and keep its mouth shut and just listen for a while.” Bannon, the former head of Breitbart News, added, “I want you to quote this. The media here is the opposition party. They don’t understand this country. They still do not understand why Donald Trump is the president of the United States.”

Are Trump & Mexican President Provoking Conflict to Distract from Low Approval Ratings at Home?
Mexican President Enrique Peña Nieto canceled a meeting with President Trump that was scheduled for next week, as tensions between the two countries rise. The move came after Trump announced plans Wednesday to expand the border wall between the U.S. and Mexico—a wall Trump has repeatedly said he would force Mexico to pay for. On Thursday, White House Press Secretary Sean Spicer said the U.S. would impose a 20 percent tax on all goods imported from Mexico and use the proceeds to pay for the expanded border wall. But after widespread outrage at the plan, Spicer walked back his statements only hours later, saying the import tax was just “one idea.”

Will Trump’s Claims of Election Fraud Pave the Way for an Assault on Voting Rights?
Trump is calling for a “major investigation” of voter fraud, as he continues to stand by his lies about the 2016 election despite the fact that his claims have been widely debunked by experts. Trump falsely asserted that he lost the popular vote to Hillary Clinton because 3 to 5 million unauthorized votes were cast in the election. Trump claims a 2008 study published by the Pew Research Foundation supports his “belief” of widespread voter fraud. However, according to Politico, there is no 2008 Pew study saying any such thing. There is another study—published in 2014 and since widely debunked—that mistakenly claimed 14 percent of noncitizens said they were registered to vote in 2008 and 2010. Brian Schaffner, one of the academics behind the survey that led to this study, told CNN Trump is misinterpreting the study, calling Trump’s claims “absurd” and “not even plausible.”

Hundreds of Thousands Sign Petition to Impeach Trump for Violating Constitution over Biz Interests
Donald Trump’s presidency is less than a week old, but some attorneys say a case for impeachment can already be made. John Bonifaz, co-founder and president of Free Speech for People, says Trump has violated a part of the U.S. Constitution that bars Trump from receiving payments from foreign governments. The effort is being led by Free Speech for People and RootsAction.

President Donald Trump to publish weekly list of crimes committed by immigrants | The Independent
We can’t even. And this is only day five. By the way, Trevor Noah has pointed out that the Cheeto-in-Chief’s plan to punish “sanctuary cities” violates the Tenth Amendment.

Fact-checking what Donald Trump got wrong in his ABC News interview | PolitiFact
Probably the entire interview.