Roger Waters of Pink Floyd has launched a campaign to close Guantanamo Bay while Pres. Obama is still in office. 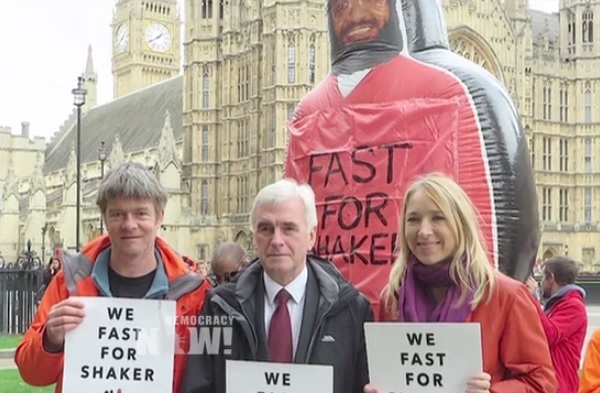 Campaigners for the release of Shaker Aamer outside the U.K. parliament. Image: video still

Roger Waters of Pink Floyd has launched a campaign to close Guantanamo Bay while Pres. Obama is still in office. He was previously involved in the campaign to release Shaker Aamer, alongside British investigative journalist Andy Worthington. An interview with Roger and Andy is featured on today’s show.

The episode also examines the case of Angel Rosa, a Guatemalan national who faces deportation from Utah following reports he began suffering from gangrene in the immigration detention center where he was held. Finally, revered poet Martin Espada joins Amy in the studio to discuss his new poetry collection, Vivas to Those Who Have Failed.