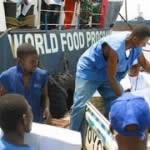 As Senate Democrats say they’ll vote against a government spending bill that fails to protect DACA recipients, today’s show reports on the worldwide refugee crisis. The United Nations Refugee Agency reports more than 65 million people have been forcibly displaced from their homes.

As Shutdown Looms over Immigration, Trump’s Rejection of Refugees Could Have Global Domino Effect
As Senate Democrats say they’ll vote against a government spending bill that fails to protect DACA recipients, setting up a potential government shutdown, this segment looks at the worldwide refugee crisis. The United Nations Refugee Agency reports the number of displaced people worldwide has hit a record high, with more than 65 million people forcibly displaced from their homes. As the humanitarian crisis grows, the United States and many other nations are limiting immigration and closing their borders. During his first year in office, President Trump sought to ban all refugees and citizens of many majority-Muslim nations. When federal judges struck down multiple versions of the so-called Muslim travel bans, Trump then slashed the number of refugees who could be resettled in the United States this year, capping the number at 45,000—the lowest level in three decades.

Keeanga-Yamahtta Taylor: Democratic Party Faces Reckoning for Purging Sanders Supporters
As President Trump completes his first year in office, activists in cities across the country will hold mass protests Saturday on the first anniversary of the historic Women’s March. This comes as a slew of lawmakers have joined members of the Black Congressional Caucus in backing a resolution to censure President Trump over his racist comments in which the president reportedly used an expletive to refer to African nations, El Salvador and Haiti. Several Democratic lawmakers say they will also skip the State of the Union address on January 30 over Trump’s racist remarks. Meanwhile, Trump himself denies being a racist, claiming on Sunday that he is “the least racist person.” Discussing Trump’s first year in office, the direction of the Democratic Party and where racial justice movements go from here is Keeanga-Yamahtta Taylor, assistant professor of African American studies at Princeton University. She is the author of “From #BlackLivesMatter to Black Liberation” and editor of a new collection of essays titled “How We Get Free: Black Feminism and the Combahee River Collective.”

Eric is busily working on The Art of Becoming, the 2018 Planet Waves Annual; and we expect to publish by the end of this month. You can pre-order all 12 chapter-length signs here, or you may choose your individual signs here.

One thought on “As Shutdown Looms over Immigration, Trump’s Rejection of Refugees Could Have Global Domino Effect”