Last night was the final Republican debate before Super Tuesday, when about 12 states decide their nominee. Pulitzer Prize-winning journalist Jose Antonio Vargas notes the lack of empathy from the candidates on immigration. 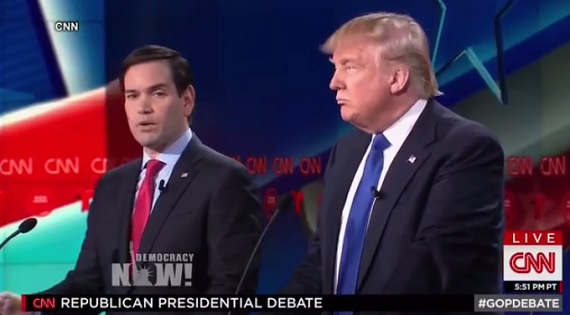 Last night was the final Republican debate before Super Tuesday, when about 12 states decide their nominee. The contest focused on immigration. Amy Goodman talks with Pulitzer Prize-winning journalist Jose Antonio Vargas on the apparent lack of empathy, especially notable in the two Hispanic candidates who, Vargas notes, “are trying to out-Trump Trump.”

There is also a possibility that Trump could be forced out of the race due to a lawsuit over “Trump University,” where students who paid up to $50,000 were promised they would meet Trump, but instead “got to take a picture with a cardboard cutout.”

Also today, Juan Gonzalez reports on the Congressional hearings regarding the Puerto Rican debt crisis; and The Intercept’s Lee Fang discusses his latest article on TV pundits praising Hillary Clinton on air but failing to disclose financial relationships with her campaign.

The final segment of the show is a tribute to John Trudell, a long-time activist for Native American rights, who died in December at the age of 69.