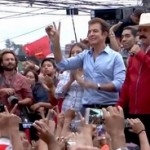 In an exclusive interview, former Honduran President Manuel Zelaya, who was ousted in a 2009 U.S.-backed coup, says U.S. actions led to the current political crisis in Honduras. The government continues to withhold the results of the November presidential election.

No Democracy Here: Ousted Honduran Pres. Zelaya Says 2009 U.S.-Backed Coup Led to Election Crisis
In an exclusive interview, former Honduran President Manuel Zelaya, who was ousted in a 2009 U.S.-backed coup, says U.S. actions led to the current political crisis in Honduras. The government continues to withhold the results of the November presidential election, which pitted U.S.-backed President Juan Orlando Hernández against opposition candidate Salvador Nasralla. Massive protests erupted after the government-controlled electoral commission stopped tallying votes when the count showed Nasralla ahead. Zelaya now heads the opposition LIBRE party, which is part of the Alliance Against the Dictatorship coalition led by Nasralla.

“The Dangerous Case of Donald Trump”: Psychiatrist Dr. Bandy Lee on Growing Mental Health Concerns
Questions over President Donald Trump’s mental health continue to grow, following his speech on Wednesday where he slurred his speech and mispronounced words during an address on Israel. White House Press Secretary Sarah Huckabee Sanders responded Thursday to the mounting concerns by announcing that Trump has scheduled a physical health exam. Meanwhile, Pentagon leaders last month told a Senate panel they would ignore any unlawful order by the president to launch a nuclear strike. The testimony came as part of the first congressional hearings in more than 40 years on the president’s authority to start a nuclear war. Dr. Bandy Lee is a forensic psychiatrist on the faculty of Yale School of Medicine and an internationally recognized expert on violence. She edited the best-selling book, “The Dangerous Case of Donald Trump: 27 Psychiatrists and Mental Health Experts Assess a President.”