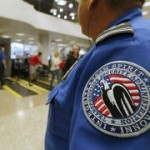 Is the U.S. Exporting Its Travel Ban with Thousands of TSA & DHS Agents in 70 Countries?
A New York Times investigation has revealed how the Department of Homeland Security is increasingly going global, with thousands of agents from the Department of Homeland Security and the Transportation Security Administration stationed in more than 70 countries around the world. Hundreds more DHS workers are deployed at sea on Coast Guard ships or in the skies on surveillance planes. Stationing ICE overseas is reportedly about four times as expensive as a domestic post. Now some countries are accusing DHS of attempting to export the United States’ restrictive immigration laws, with one German politician saying DHS’s interrogations and detentions at foreign airports constitute an extrajudicial travel ban. Ron Nixon is The New York Times’s homeland security correspondent who broke the story, “Homeland Security Goes Abroad. Not Everyone Is Grateful.”

Concerns Raised About $1 Billion Facial Scan Program with High Error Rate at Nine U.S. Airports
This month, Senators Mike Lee, a Republican, and Edward Markey, a Democrat, called for a halt to the expansion of a $1 billion airport facial scanning program that the Department of Homeland Security uses to identify travelers on some flights that depart from nine U.S. airports: Boston, Las Vegas, Miami, New York’s John F. Kennedy, Washington Dulles, both Houston airports, Chicago O‘Hare and Atlanta. Congress has approved the program for use on non-U.S. citizens but never expressly authorized its use on Americans. The senators also asked DHS to provide data about the accuracy of the scans and cited a study by the Center on Privacy and Technology that said the technology had high error rates and was subject to bias, because the scans often fail to properly identify women and African Americans.

Deportation Now on Hold for Mexican Journalist Emilio Gutiérrez Soto, But He Remains in Detention
After a visit from Texas Democratic Congressmember Beto O’Rourke and a flurry of news reports, including on Democracy Now!, the Board of Immigration Appeals has reopened the asylum case of award-winning journalist Emilio Gutiérrez Soto, vacating his deportation order and granting him a full stay of his removal order. This means Gutiérrez cannot be deported, at the moment, and that the BIA will now issue a new ruling. But Gutiérrez has still not been released.