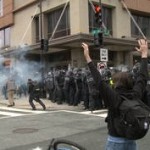 Final arguments are underway today in Washington, D.C., in a case that could shape the future of free speech and the right to protest in the United States: the first trial of the nearly 200 people arrested during President Donald Trump’s inauguration.

Medics, Observers & a Journalist Face 50 Years in Prison in First Trial of J20 Inauguration Protests
Final arguments are underway today in Washington, D.C., in a case that could shape the future of free speech and the right to protest in the United States: the first trial of the nearly 200 people arrested during President Donald Trump’s inauguration. As demonstrators, journalists and observers gathered in Northwest D.C. after the inauguration on January 20, some separated from the group and vandalized nearby businesses and vehicles. Police officers then swept hundreds of people in the vicinity into a blockaded corner in a process known as “kettling,” where they carried out mass arrests of everyone in the area. The first so-called J20 trial could go to a jury as early as today, and involves six people, including one journalist, Alexei Wood, a freelance photojournalist. The defendants face multiple felony and misdemeanor charges, including multiple counts of destruction of property. Evidence against the defendants has been scant.

The Growing Case for Impeaching Donald Trump, From Lawlessness and Corruption to Abuse of Power
On Thursday, another Democrat endorsed articles of impeachment against President Donald Trump, a resolution presented in November by a half-dozen Democrats accusing Trump of obstruction of justice and other offenses. Democrat Carol Shea-Porter of New Hampshire is the latest official to join the effort and is one of 12 House Democrats who represent a district won by Trump in 2016. This comes as a petition for impeachment launched in October by Democratic donor Tom Steyer has garnered more than 3.5 million supporters. At least 17 communities around the country are now on record calling for impeachment proceedings against Trump. “It is not acceptable to say that we will simply kick the can down the road and wait until after an election cycle to lay the groundwork for the impeachment proceedings,” says constitutional attorney John Bonifaz, co-founder and director of Free Speech for People. “We need to be laying that groundwork and making this call now.”

Psychiatrists “Deeply Concerned” by Trump’s Instability Call for Urgent Mental Health Evaluation
Dr. Bandy Lee is a forensic psychiatrist on the faculty of Yale School of Medicine who organized the “Duty to Warn” conference at Yale and edited the best-selling book, “The Dangerous Case of Donald Trump: 27 Psychiatrists and Mental Health Experts Assess a President.” She declares that she is not representing the views of Yale University, Yale School of Medicine or Yale Department of Psychiatry.