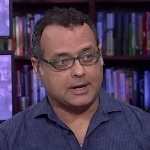 As the United States backs a Turkish military incursion into Syria targeting ISIS-held areas along the border, Turkey says it’s also concerned about Syrian Kurdish militias at the border who are backed by the United States. Today’s show looks at the conflict with an acclaimed scholar who has followed the region closely for years: Vijay Prashad. 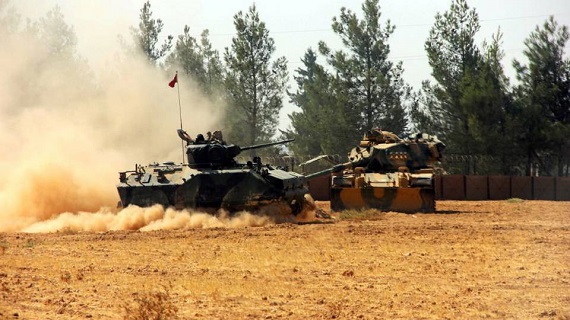 What is Turkey’s real motivation for intervening in Syria? Image from Democracy Now! website.

As the United States backs a Turkish military incursion into Syria targeting ISIS-held areas along the border, Turkey says it’s also concerned about Syrian Kurdish militias at the border who are backed by the United States. Today’s show looks at the conflict, how it relates to the recent thwarted coup attempt, and the government’s subsequent arrests of journalists on terrorism charges with an acclaimed scholar who has followed the region closely for years: Vijay Prashad. He is a professor of international studies at Trinity College and columnist for the Indian magazine Frontline. His new book is “The Death of the Nation and the Future of the Arab Revolution.”

Prashad, speaking about how the United States carried out regime change in Libya and left behind a failed state, notes: “The story in Libya is not dissimilar to the story in Iraq.” Both are politically divided societies in which the United States deposed long-entrenched leaders, Muammar Gaddafi in Libya and Saddam Hussein in Iraq, and left behind failed states. Prashad adds that “in both instances, when the strongman was captured … they said, ‘We are ready to negotiate,’ and the United States essentially was not interested in negotiating.” He says the outcome in Libya contributed to the destabilization of Mali, Tunisia and much of northern Africa.

Prashad also discusses the U.S. presidential election and notes that while President Obama was reticent, then-Secretary of State “Hillary Clinton led the charge against Libya. This shows, to my mind, a profound dangerous tendency to go into wars overseas, damn the consequences. If you’re looking at this from outside the United States, there’s a real reason to be terrified.”

In Kashmir, another protester was killed and as many as 50 people wounded when Indian security forces opened fire and threw tear gas at crowds of protesters on Wednesday. Residents say the confrontation came after Indian troops descended on a neighborhood, beating people and destroying a tent that was to host a meeting about Kashmir’s independence.

About 70 people have died in Kashmir since anti-India protests erupted on July 8, after Indian security forces killed a prominent Kashmiri independence leader. On Wednesday, the Indian home minister traveled to Kashmir for a two-day visit aimed at defusing the protests. Among those who have been killed is a 30-year-old professor who was beaten to death in Indian army custody. Many others have reported being beaten by troops in their own homes.

Just back from a trip to the Arctic aboard the Greenpeace ship the Arctic Sunrise, celebrated British actress Emma Thompson talks about visiting the Canadian town of Clyde River, which has been leading efforts against the oil industry blasting the Arctic in its search for oil and gas. Two years ago, Thompson joined another Greenpeace expedition to protest drilling in the Arctic and to research the impact climate change has already had on the region. Thompson also spoke about Nigel Farage having joined Donald Trump at a campaign rally in Mississippi on Wednesday.