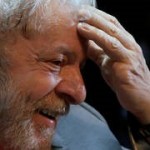 A judge on Thursday ordered former Brazilian President Luiz Inácio Lula da Silva to turn himself in to police within 24 hours and begin serving a 12-year sentence for a controversial corruption conviction, effectively removing him from Brazil’s presidential election later this year.

Brazil’s Popular Ex-President Lula Ordered to Prison After Politically Motivated Trial & Conviction
A judge on Thursday ordered former Brazilian President Luiz Inácio Lula da Silva to turn himself in to police within 24 hours and begin serving a 12-year sentence for a controversial corruption conviction, effectively removing him from Brazil’s presidential election later this year, where he was the front-runner. Lula is a former union leader who served as president of Brazil from 2003 to 2010. During that time, he helped lift tens of millions of Brazilians out of poverty. His supporters say the ruling against him is a continuation of the coup that ousted Lula’s ally Dilma Rousseff from power last year.

Trump Inks Arms Deal with Saudis as Humanitarian Crisis Rages in Yemen & Saudi Prince Tours U.S.
On Thursday, the Trump administration told Congress it has approved a $1.3 billion artillery sale to Saudi Arabia. This is the second weapons deal between the U.S. and Riyadh in as many months and has sparked concern from human rights groups, who warn the deals may make the United States complicit in war crimes committed in the Saudi-led bombing campaign in Yemen. Lawmakers have 30 days to act before the sale is final. The announcement comes as Crown Prince Mohammed bin Salman wraps up his whirlwind tour of the United States. One topic that has received relatively little media attention during his trip is his role in escalating Saudi Arabia’s military involvement in Yemen. Last month marked three years since the U.S.-backed, Saudi-led coalition began its military offensive in Yemen, leading to one of the world’s worst humanitarian crises. The U.S.-backed, Saudi-led airstrikes and naval blockade have destroyed Yemen’s health, water and sanitation systems, sparking a massive cholera outbreak and pushing millions of Yemenis to the brink of starvation. More than 15,000 people have died since the Saudi invasion in 2015.

How Iona Craig Exposed the White House Lie About 2017 SEAL Raid That Killed Yemeni Women & Children
Reporter Iona Craig exposed the Trump administration’s lie about its first military engagement and is in New York to receive the George Polk Award for documenting the destruction and civilian casualties from a covert U.S. Navy SEAL raid on a remote village in Yemen that left 25 civilians and one U.S. soldier dead.

Judge Suspends Release of Herman Bell, Elderly Black Panther Jailed 45 Years, Amid Police Pressure
A judge in New York has suspended the release of Herman Bell, a 70-year-old prisoner who has been granted parole after 45 years in prison. Bell was sentenced to 25 years to life in prison for the killing of two New York City police officers in 1971. At the time, he was a member of the Black Liberation Army and a former Black Panther. Since then, he has mentored thousands of young men while behind bars and kept a clean disciplinary record. State-mandated tests show he would pose the lowest possible risk if he is allowed to re-enter society. In March, the New York Parole Board granted parole for Bell, noting he had expressed remorse and was likely to lead a “law-abiding life.” State law requires commissioners to consider such factors, but they’ve only recently started to comply. On Wednesday, a state judge agreed to hear a challenge from the widow of one of the officers, who says the board violated procedure. A hearing on the petition is set for April 13, just days before Bell’s earliest originally scheduled release date.