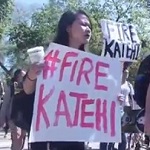 A 2011 video of peacefully protesting students at UC Davis being pepper-sprayed went viral, and the school has tried to scrub it from the Internet. The school’s chancellor, Linda Katehi, is being investigated for allegations of nepotism and conflicts of interest, as well as mishandling of those protests. 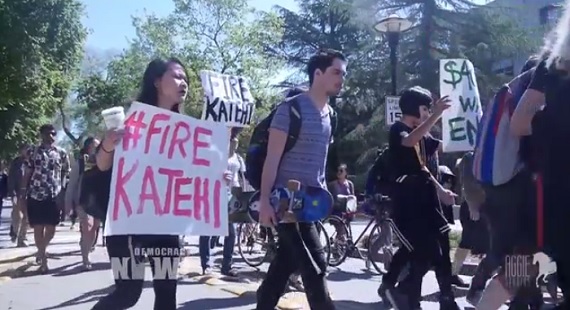 In 2011, the University of California, Davis, made headlines. A video of peacefully protesting students being pepper-sprayed at close range by campus police went viral. The school’s chancellor, Linda Katehi, has now been placed on administrative leave after students staged a 36-day sit-in at her office. Katehi is being investigated for allegations of nepotism and conflicts of interest, as well as mishandling of the 2011 protests.

Two of the students who took place in the sit-in, Kyla Burke and Parisa Esfahani, spoke to Amy Goodman. Parisa said: “We pay a hefty tuition to be at this school. We are supposed to be the voices and the faces of the university. It’s an institution of education, but it’s become an institution of money making and lack of accountability.” Kyla Burke explained some of the recent allegations:

So the latest—the latest issue that The Sacramento Bee discovered was that the university had spent $175,000 to try and wipe references to the pepper spray and to Katehi off the internet. And it really shows how concerned—what their concerns are, with like protecting administration and maintaining good PR, and not actually holding anyone accountable or making the changes, after that kind of incident, they should have.

The show then turns to Northern Arizona University, or NAU, where students are currently involved in a sit-in to call on their school to divest from fossil fuels. At least eight students have been arrested after they refused to leave a university building at closing time. Their protest is part of a national “Fossil Free” movement to pressure colleges to address the issue of climate change. Michaela Mujica-Steiner, one of the co-ordinators of the NAU protest, said: “We plan to continue this protest until we get our demand met that the university president will come out with a statement of support on fossil fuel divestment. And we believe that we can be persistent in this.”

So, there are two stories: There’s a green story, and there’s a red story. The green story begins first, and that goes back to agriculture, it goes back to the sun, because this is springtime. This is the beginning—the Earth has turned in its relationship to solar energy. The green story is a story of fertility. Winter is over. Summer is upon us. It’s a time of fruition and dancing and happiness. It’s a time to dance around the maypole …

The eight-hour movement became an international movement of workers all over. That’s the origin of the red side, because, later, the socialist movement, the anarchists and then the communist parties, they took it. They were forced to take it by workers all over who were demanding an eight-hour day. Men and women, black and white, Asian and European, all over, celebrate that day and the Chicago ideal. The Chicago ideal was, again, eight hours’ work, eight hours’ rest, eight hours for what you will. This is why we celebrate it.

You can find out more on this page.