Today’s show features an exclusive interview with Cherelle Baldwin after yesterday’s not guilty verdict. Her mother Cynthia Long and attorney Miles Gerety were also part of the interview. 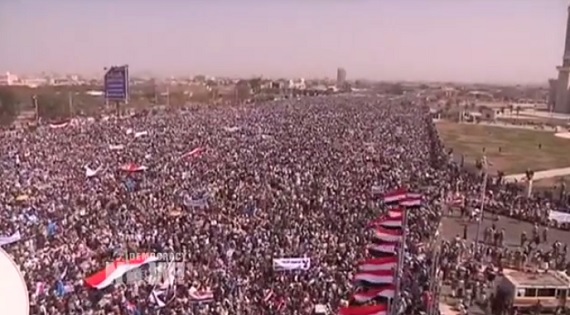 In Yemen, hundreds of thousands protest the first anniversary of the U.S.-backed, Saudi-led offensive against the Houthi rebels. Image: video still

Today’s show features an exclusive interview with Cherelle Baldwin after yesterday’s not guilty verdict. Her mother Cynthia Long and attorney Miles Gerety were also part of the interview. Here is what Gerety had to say about current self-defense law:

What a lot of women’s groups are saying, first place, there ought to be a virtual castle doctrine. If there’s a court order saying you’re not to be attacked, you’re not to be harassed, you ought not to have the duty to retreat. And, you know, as much talk as there is of “Stand Your Ground,” this is a situation where Cherelle, being slight at the — you know, smaller than Jeffrey Brown, not having — you know, women are likely to own a gun a third as—you know, three times as many men have guns. If she was bigger and stronger and beat him to death in her apartment, she never would have been charged. But as soon as she leaves her home, they changed. And that’s wrong. I mean, that is really — that law needs to be changed. And, you know, it’s amazing to me that in 2016 we’re still dealing with the societal pressures, you know, where if a woman defends herself, suddenly she’s complicit in her battering. And, you know, this is really a problem.

Today’s show also covers huge protests in Yemen on the first anniversary of a Saudi offensive against Houthi rebels, which was backed by the U.S. Sarah Leah Whitson, executive director of Human Rights Watch’s Middle East and North Africa Division, and Farea Al-Muslimi, a visiting scholar at the Carnegie Middle East Center in Beirut, spoke with Amy and Juan. Whitson said: “Yemenis are asking me, ’Why is there no global outrage when our schools, our universities, our hospitals, our clinics, when football fields, when playgrounds are bombed with U.S. bombs?” Further, new reports show Pres. Obama has overseen a major increase in weapons sales since taking office; Saudi Arabia tops the list at $46 billion in new agreements.

Finally, about 5 million workers will see their wages increase substantially after a historic victory for the “Fight for 15″ campaign. Both the state of California and New York City have voted to raise the minimum wage to $15 per hour in the coming years, which campaigners are calling one of the largest pay raises in American history.