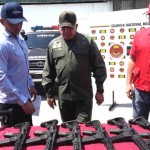 Venezuela Accuses U.S. of Secretly Shipping Arms After Weapons Found on Plane with Possible CIA Ties
A North Carolina-based air freight company has halted flights to Venezuela following a report by McClatchy linking it to possible arms smuggling. Last week, Venezuelan authorities claimed they had uncovered 19 assault weapons, 118 ammunition cartridges and 90 military-grade radio antennas on board a U.S.-owned plane that had flown from Miami into Valencia, Venezuela’s third-largest city. The Boeing 767 is owned by a company called 21 Air based in Greensboro, North Carolina. The plane had made nearly 40 round-trip flights between Miami and spots in Venezuela and Colombia since January 11, the day after Venezuelan President Nicolás Maduro was sworn in to a second term. The flights ended after McClatchy first reported on them. Venezuela accused the U.S. government of sending the arms as part of its attempt to topple the Maduro government. While no definitive links between 21 Air and the U.S. government have been established, McClatchy reports the chairman of 21 Air, Adolfo Moreno, as well as another employee at the company have ties to Gemini Air Cargo, which was involved in the CIA’s rendition program during the administration of George W. Bush. McClatchy reporter Tim Johnson, who broke the story, is interviewed. Johnson was part of a team that shared a 2017 Pulitzer Prize for its investigation of the Panama Papers.

Atlanta School Cheating Scandal: The Untold Story of Corporate Greed & Criminalization of Teachers
As teacher strikes in Denver and Los Angeles join a wave of recent labor actions bringing attention to the plight of the American public school system, Democracy Now! takes a fresh look at one of the largest public school scandals in U.S. history. Public schools in Atlanta, Georgia, were thrown into chaos in 2015 when 11 former educators were convicted in 2015 of racketeering and other charges for allegedly facilitating a massive cheating operation on standardized tests. Prosecutors said the teachers were forced to modify incorrect answers and students were even allowed to fix their responses during exams. The case has fueled criticism of the education system’s reliance on standardized testing, and elicited calls of racism. Thirty-four of the 35 educators indicted in the scandal were African-American. Shani Robinson is one of the 11 convicted teachers, and has written a new book on the cheating scandal with journalist Anna Simonton. It’s titled “None of the Above: The Untold Story of the Atlanta Public Schools Cheating Scandal, Corporate Greed, and the Criminalization of Educators.”