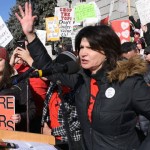 Denver Teachers Strike over Bonus-Based Pay System, Demanding Reliable Salary Plan & Better Wages
Public school teachers in Denver, Colorado, are striking for the second day, after negotiations between the teachers’ union and the school district failed to reach a contract over the weekend. The Denver Classroom Teachers Association is demanding an increase in teachers’ base salaries rather than putting money in incentives and bonuses. The Denver teachers walked out Monday following 15 months of negotiations over a controversial bonus-based pay system that educators say leaves them unable to predict their salaries and guarantee financial security. The starting salary for a Denver teacher for the 2019-2020 school year is $43,255, according to The Denver Post. This is the district’s first teacher strike in 25 years. Henry Román is a Denver elementary school teacher and president of the Denver Classroom Teachers Association.

Wright State Faculty Ends One of the Longest Strikes at a Public University in U.S. History
In Dayton, Ohio, faculty members at Wright State University have just concluded one of the longest public university strikes in U.S. history. On Sunday, the university’s administration reached a tentative contract agreement with the faculty union’s executive committee, which union members will vote to ratify in coming days. The strike began late last month, when the university imposed a contract on faculty members that worsened working conditions and decreased benefits. When the administration refused to negotiate, 85 percent of Wright State University’s union members voted to authorize a strike. Rudy Fichtenbaum is the president of the American Association of University Professors. He is the chief negotiator for the association’s chapter at Wright State University, where he is professor emeritus of economics.

The End of Ice: Dahr Jamail on Climate Disruption from the Melting Himalayas to Insect Extinction
A new report finds at least a third of the Himalayan ice cap will melt by the end of the century due to climate change, even if the world’s most ambitious environmental reforms are implemented. The report, released by the Hindu Kush Himalaya Assessment earlier this month, is the culmination of half a decade’s work by over 200 scientists, with an additional 125 experts peer reviewing their work. It warns rising temperatures in the Himalayas could lead to mass population displacement, as well as catastrophic food and water insecurity. The glaciers are a vital water source for the 250 million people who live in the Hindu Kush Himalaya range, which spans from Afghanistan to Burma. More than 1.5 billion people depend on the rivers that flow from the Himalayan peaks. Dahr Jamail is an independent journalist and Truthout staff reporter. He is the author of the new book “The End of Ice: Bearing Witness and Finding Meaning in the Path of Climate Disruption.”