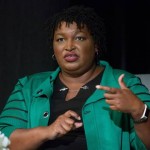 Democrats have selected former Georgia gubernatorial candidate Stacey Abrams to deliver the response to President Trump’s State of the Union address. The address will take place on Tuesday, after being delayed due to the government shutdown. Abrams will become the first person not in public office to respond to the president, as well as the first African-American woman to deliver the response.

Stacey Abrams: “We Have to Work Harder” Than Those Who Would Suppress the Vote
Democrats have selected former Georgia gubernatorial candidate Stacey Abrams to deliver the response to President Trump’s State of the Union address. The address will take place on Tuesday, after being delayed due to the government shutdown. Abrams will become the first person not in public office to respond to the president, as well as the first African-American woman to deliver the response. She recently launched Fair Fight Action, a voting rights advocacy group, after she narrowly lost Georgia’s governor’s race to Secretary of State Brian Kemp, who was widely accused of suppressing the vote. In mid-November, Abrams refused to concede the race, and Fair Fight Action is now suing Georgia election officials for mismanagement of the midterm elections. Democracy Now! recently spoke to Abrams in Los Angeles, where she was attending the National Day of Racial Healing. “Our responsibility doesn’t end on Election Day,” she said. “The minute the elections are over, the people who won—who did not share our values—are going to be working hard. We have to be working even harder.”

Dialogue: Women’s March Leaders on Anti-Semitism, Islamophobia, Racism & More
Thousands took to the streets for women’s marches across the country on January 19, exactly two years after Donald Trump’s inauguration sparked a burgeoning women’s movement. But some of this year’s marches were steeped in controversy. In November, Teresa Shook, one of the founders of the Women’s March movement, called for the removal of the four national co-chairs: Bob Bland, Tamika Mallory, Carmen Perez and Linda Sarsour. She accused them of allowing “anti-Semitism, anti-LBGTQIA sentiment and hateful, racist rhetoric to become a part of the platform.” Much of the criticism focused on links between some of the co-chairs and the Nation of Islam’s Minister Louis Farrakhan, who has been widely accused of being anti-Semitic. A new documentary premiering at the Sundance Film Festival captures how Mallory and the movement handled the crisis. It’s called “This Is Personal.” On Monday, Tamika Mallory and Linda Sarsour joined Rebecca Walker, author of the autobiography “Black, White, and Jewish,” and Nancy Kaufman, CEO of the National Council of Jewish Women, to discuss the controversy.

Tessa Thompson & Time’s Up Call on Hollywood to Work with More Women Directors in #4PercentChallenge
Acclaimed actor Tessa Thompson joins us at the Sundance Film Festival to talk about the Me Too movement and the Time’s Up initiative, which is pushing Hollywood studios and actors to commit to work with women directors in its new #4PercentChallenge. Time’s Up is about “addressing safety in the workplace,” says Thompson. “It’s really looking at imbalance of power.”

“RBG” Documentary Nominated for Academy Award as Supreme Court Justice Recovers from Lung Surgery
Supreme Court Justice Ruth Bader Ginsburg recently missed oral arguments as she continues to recover after having two tumors removed from her lung last month. But the Supreme Court has said she is cancer-free and that the 85-year-old, now three-time cancer-surviving justice, has been reviewing arguments and weighing in on cases from home. Meanwhile, the documentary ”RBG” about her life has been nominated for an Academy Award. At the Sundance Film Festival, Democracy Now! speaks with Julie Cohen, one of the film’s directors.