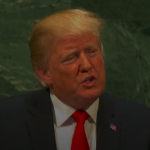 World Laughs at Trump as He Boasts About Himself in U.N. Address Threatening Iran, Venezuela
World leaders in the United Nations General Assembly burst out laughing when President Trump boasted about his accomplishments. Trump praised North Korea, attacked Germany and accused Iran of “sowing chaos, death, and destruction,” drawing scorn from Iranian president Hassan Rouhani. “What’s amazing is not that this hall of seasoned professionals laughed at him, but that he doesn’t get more laughter, and in the United States, these news programs take him seriously, and he should be laughed off the screen everywhere,” says Juan Cole, historian and author of “Engaging the Muslim World.”

Trump Admin Targets Immigrants Using Food Stamps & Medicaid & Puts Millions of Children at Risk
Drama unfolded Monday when Axios reported that Deputy Attorney General Rod Rosenstein verbally resigned over the weekend amid mounting tension over the investigation by special counsel Robert Mueller into Russia’s role in the 2016 presidential election. Last week, Rosenstein and White House Chief of Staff John Kelly met at the White House hours after The New York Times reported Rosenstein had suggested secretly recording Trump in the White House and discussed recruiting Cabinet members to invoke the 25th Amendment to remove Trump from office for being unfit. But on Monday, Trump confirmed Rosenstein still has a job, and said the two are scheduled to meet this Thursday. “I think once Mueller got Paul Manafort’s testimony locked in … to some degree, it was too late for Trump to completely undermine this investigation,” says Marcy Wheeler, in response to concerns that the Trump administration could shut down Mueller’s probe. Wheeler is an independent journalist who covers national security and civil liberties and runs the website EmptyWheel.net.

“A Tsunami of a Sentence”: Victory for Survivors as Bill Cosby Handed 3-10 Years In Prison for Rape
Dozens of women who have been accusing comedian Bill Cosby of sexual assault for decades were vindicated Tuesday when the disgraced actor was sentenced to 3 to 10 years in prison by a Philadelphia judge and sent immediately to jail. In April, a jury found Cosby guilty of three counts of aggravated indecent assault for drugging and sexually assaulting Andrea Constand, former director of operations for the women’s basketball team at Temple University, at Cosby’s home in 2004. Constand is one of more than 60 women who have accused Cosby of sexual assaults dating back decades. Many of these women were in the courtroom when Cosby was sentenced. We are joined by one of them, Lili Bernard, a visual artist and actor who has accused Bill Cosby of drugging and raping her in the early 1990s when he mentored her in preparation for her guest starring role on The Cosby Show.