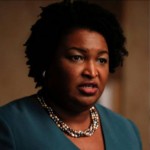 With the midterm elections just three weeks away, voting rights advocates are accusing Republican officials in several states of orchestrating a campaign of voter suppression targeting people of color.

Stacey Abrams Runs to Become Georgia’s First Black Governor as Her Opponent Suppresses the Vote
With the midterm elections just three weeks away, voting rights advocates are accusing Republican officials in several states of orchestrating a campaign of voter suppression targeting people of color. In Georgia, the Democratic candidate for governor, Stacey Abrams, is calling on her Republican opponent, Brian Kemp, to step down as secretary of state for placing 53,000 voter applications on hold. Seventy percent of the applicants are African-American. Abrams has accused Kemp of using the state’s “exact match” system to disenfranchise voters. With exact match, even a minor discrepancy in a voter’s registration and their official ID could bar them from casting a ballot. Carol Anderson is chair of the Department of African American Studies at Emory University in Atlanta, and is author of the new book “One Person, No Vote: How Voter Suppression Is Destroying Our Democracy.”

Desmond Meade Hopes to Win Voting Rights for 1.4M Floridians with Felony Convictions—Including Himself
Voters in Florida are preparing to vote on a measure that would restore voting rights to 1.4 million people with nonviolent felonies who have fully completed their sentences. One in five African Americans in Florida and 10 percent of the state’s adult population are ineligible to vote because of a criminal record. Across the United States, more than 6.1 million people with felony convictions are not eligible to vote. Florida is one of just four states that bar ex-felons from voting for life. The other states are Iowa, Kentucky and Virginia. The Brennan Center for Justice reports that Florida disenfranchises more citizens than Alabama, Georgia, Louisiana, Mississippi, North Carolina, South Carolina and Tennessee combined. Desmond Meade is the president of the Florida Rights Restoration Coalition, who is leading the fight to re-enfranchise felons in Florida. He’s also chair of the group Floridians for a Fair Democracy. Meade is an ex-offender who was previously homeless. He is still disenfranchised. Ari Berman is senior writer at Mother Jones, reporting fellow at The Nation Institute and author of “Give Us the Ballot: The Modern Struggle for Voting Rights in America.” His latest piece is titled “Inside the Unlikely Movement That Could Restore Voting Rights to 1.4 Million Floridians.”

Ari Berman: Republicans in North Dakota Are Attempting to Disenfranchise Thousands of Native Voters
The Supreme Court has ruled it will allow the state of North Dakota to enforce a new voter ID requirement that will make it harder for Native Americans to vote during the midterm elections. The state’s new voter ID law requires voters to show identification demonstrating a residential street address, but this has already rendered many tribal IDs invalid, since many Native Americans who live on reservations depend on post office boxes to receive mail. The law could make a difference in the close race between Democratic Senator Heidi Heitkamp and her Republican challenger Kevin Cramer. The race is expected to help decide who controls the U.S. Senate. Ari Berman is senior writer at Mother Jones, reporting fellow at The Nation Institute and author of “Give Us the Ballot: The Modern Struggle for Voting Rights in America.” His latest piece is titled “Inside the Unlikely Movement That Could Restore Voting Rights to 1.4 Million Floridians.”

Trump Won in 2016 Thanks to Voter Suppression Says Carol Anderson, Author of “One Person, No Vote”
Donald Trump won the 2016 presidential election due to voter suppression. That’s what professor Carol Anderson argues in her new book “One Person, No Vote: How Voter Suppression Is Destroying Our Democracy,” which tracks the rise of restrictive voting laws across the United States. In it, Anderson examines how African-American voter participation has been systematically compromised since a 2013 Supreme Court decision that gutted the 1965 Voting Rights Act. By the 2016 election, turnout among black voters nationwide dropped from 66 percent to under 60 percent. The discrepancy was even larger in key areas like Milwaukee, where turnout went down from 78 percent in 2012 to less than 50 percent in 2016. President Trump won Wisconsin by a margin of fewer than 23,000 votes. Carol Anderson, chair of the Department of African American Studies at Emory University in Atlanta, speaks about her new book and the upcoming midterm elections.