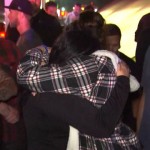 The city of Thousand Oaks, California, is mourning after a former marine opened fire at a country music bar Wednesday night, killing 12 people, mostly students. It was the deadliest mass shooting in the United States since the Parkland, Florida, school shooting in February.

After Massacre in California Bar, Will a Democrat-Controlled House Take Action on Gun Control?
The city of Thousand Oaks, California, is mourning after a former marine opened fire at a country music bar Wednesday night, killing 12 people, mostly students. It was the deadliest mass shooting in the United States since the Parkland, Florida, school shooting in February. Police have identified the gunman as 28-year-old Ian David Long, a Marine veteran who had deployed to Afghanistan and had a history of mental health issues, including possible PTSD. The dead include 27-year-old Telemachus Orfanos, who survived the deadly Las Vegas massacre at a country music festival last year, only to be gunned down Wednesday night. We speak with Sarah Dachos, a Navy veteran and volunteer with the D.C. chapter of Moms Demand Action for Gun Sense in America and a founding member of the Everytown Veterans Advisory Council.

“We Will Never Concede to Bigotry”: Florida Organizers Sound the Alarm over Voting Discrepancies
Days after the midterm elections, Florida’s contests for U.S. Senate and governor appear to be heading for recounts. Democratic gubernatorial candidate Andrew Gillum said he is prepared for a possible recount, as his margin with Republican opponent Ron DeSantis narrowed to less than half a percentage point Thursday. A recount is triggered in Florida if the winning candidate’s margin is less than half a percentage point. Incumbent Democratic Senator Bill Nelson and Republican Governor Rick Scott will likely also head to a recount in the Senate race, with Scott leading by less than a quarter percentage point as of Thursday. Republican Florida Gov. Rick Scott is also suing the Democratic election supervisors of Broward and Palm Beach counties, accusing them of trying to steal the election. Andrea Cristina Mercado, executive director of The New Florida Majority, is interviewed to discuss the group’s grassroots organizing to expand the electorate in Florida. She also details reports of widespread voting problems on Tuesday, including confusion over ballot design and problems with accessing polling sites and navigating Florida’s voter ID law.

Rashida Tlaib on Impeaching Trump, Occupied Palestine & Becoming One of First Muslim Congresswomen
On Tuesday evening, Palestinian American Rashida Tlaib in Michigan and Somali American Ilhan Omar in Minnesota became the first two Muslim women ever elected to Congress. Rashida Tlaib is a Democratic Socialist who supports the Palestinian right of return and a one-state solution. She also supports Medicare for all, a $15 minimum wage and abolishing ICE. The child of immigrants, Tlaib has spoken out against the Trump administration’s travel bans.