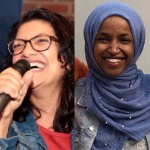 In a historic midterm election, Democrats have seized control of the House of Representatives, flipping more than two dozen seats. This gives Democrats subpoena power for the first time since President Donald Trump was elected two years ago.

In Rebuke of Trump, Democratic Women Help Seize House & 7 Governorships In Historic Midterm
In a historic midterm election, Democrats have seized control of the House of Representatives, flipping more than two dozen seats. This gives Democrats subpoena power for the first time since President Donald Trump was elected two years ago. While the Democrats will control the House, the Republicans picked up two more seats in the Senate. The midterms were a groundbreaking election for women. At least 100 women will serve in the U.S. House for the first time in U.S. history, including the first two Native American women and the first two Muslim women. Katrina vanden Heuvel, editor and publisher of The Nation, and Rashad Robinson, executive director of Color of Change are interviewed.

Carol Anderson: Massive Voter Suppression Could Be Deciding Factor in Georgia Governor’s Race
Georgia Secretary of State Brian Kemp is holding a slim lead over Democrat Stacey Abrams in the race to be governor of Georgia. Abrams is vying to be the first black woman governor in U.S. history. Despite Kemp’s slight lead, Abrams is refusing to concede because thousands of absentee ballots have not yet been counted. Kemp is currently at 50.5 percent. If he dips below 50 percent, the race will go to a runoff. The Georgia race was marred by widespread allegations of voter suppression carried out by Brian Kemp. Carol Anderson, chair of the African American Studies Department at Emory University and author, most recently, of “One Person, No Vote: How Voter Suppression Is Destroying Our Democracy” is interviewed.

Katrina vanden Heuvel: Democrats Must Offer Bold, Progressive Plan While Holding Trump Accountable
As Democrats retake the House of Representatives for the first time in eight years, Katrina vanden Heuvel, editor and publisher of The Nation, speaks about the future of the Democratic Party. The Democrats picked up more than the 23 seats they needed to flip the House, but the Republican Party expanded its grip on the Senate in Tuesday’s midterm elections. Democratic Leader Nancy Pelosi is poised to reclaim her gavel as speaker of the House, barring a leadership challenge.

“Love Prevails”: Floridians Celebrate Massive Restoration of Voting Rights to People with Felonies
At least 1.4 million people have regained the right to vote in Florida, following the passage of Amendment 4, a statewide initiative to re-enfranchise people with felony convictions who have completed their sentences, excluding people convicted of murder or sex offenses. The amendment passed overwhelmingly, with 64.5 percent of the vote. It needed 60 percent to pass. The win will permanently alter politics in a state that elected Republican Ron DeSantis as Florida governor by just over 55,000 votes, according to the latest numbers. DeSantis defeated Democratic gubernatorial candidate Andrew Gillum, who was vying to be the first African-American governor in Florida’s history. Desmond Meade, who spearheaded the fight for Amendment 4, is interviewed. Desmond Meade is the president of the Florida Rights Restoration Coalition. He’s also chair of Floridians for a Fair Democracy. He is one of some 1.4 million people who has just regained his right to vote.