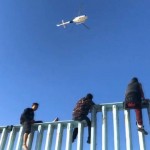 In the latest pushback against President Trump’s attack on immigrants rights, a federal judge in California has temporarily halted Trump’s asylum ban, which attempted to deny asylum to anyone entering the country from outside of a legal port of entry.

Federal Judge Blocks Trump’s “Asylum Ban,” Saying President Can’t Rewrite Immigration Laws
In the latest pushback against President Trump’s attack on immigrants rights, a federal judge in California has temporarily halted Trump’s asylum ban, which attempted to deny asylum to anyone entering the country from outside of a legal port of entry. Trump announced the move earlier this month, but Monday, U.S. District Judge Jon Tigar put a temporary halt on the order. Tigar wrote, “Asylum seekers will be put at increased risk of violence and other harms at the border, and many will be deprived of meritorious asylum claims. The government offers nothing in support of the new rule that outweighs the need to avoid these harms.” We speak with one of the lawyers who sued the Trump administration over the ban, legal director for the Center for Constitutional Rights Baher Azmy.

New American Nazis: Inside the White Supremacist Movement That Fueled Pittsburgh Synagogue Shooting
Neo-Nazis are on the rise in America. Nearly a month after a gunman killed eleven Jewish worshipers at the Tree of Life synagogue in Pittsburgh, we look at the violent hate groups that helped fuel the massacre. On the same day that shooter Robert Bowers opened fire in the synagogue, a neo-Nazi named Edward Clark that Bowers had been communicating with online took his own life in Washington, D.C. The man’s brother, Jeffrey Clark, has since been arrested on weapons charges. The brothers were both linked to the violent white supremacist group Atomwaffen. We speak with A.C. Thompson, correspondent for FRONTLINE PBS and reporter for ProPublica. His investigation “Documenting Hate: New American Nazis” premieres tonight on PBS stations and online.

How America’s Perpetual Warfare Abroad Is Fueling an Increase in White Supremacist Violence in U.S.
America’s perpetual warfare abroad has led to an increase in white supremacist violence at home. That’s one of the key findings in Frontline PBS and ProPublica reporter A.C. Thompson’s new investigation, “Documenting Hate: New American Nazis,” which premieres Tuesday evening on PBS. The documentary reveals the deep ties between the military and white supremacy, as Thompson examines the Pittsburgh shooting and the rise of violent hate groups such as Atomwaffen. Thompson interviews historian Kathleen Belew, who says there has always been a correlation in the U.S. between the aftermath of war and the rise of white supremacist violence. “If you look for instance at the surges in Ku Klux Klan membership, they align more consistently with the return of veterans from combat and the aftermath of war than they do with anti-immigration, populism, economic hardship or any of the other factors that historians have typically used to explain them,” she notes. We speak with A.C. Thompson in Boston. His investigation premieres Tuesday on PBS stations and online.