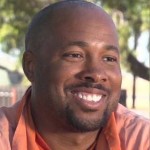 As the death toll from the Camp Fire rises to 77, California is combatting its deadliest fire in state history using prison labor. Some 1,500 of the 9,400 firefighters currently battling fires in California are incarcerated.

Meet the Prisoners Being Paid $1 an Hour to Battle the Deadly Climate-Fueled Fires of California
As the death toll from the Camp Fire rises to 77, California is combatting its deadliest fire in state history using prison labor. Some 1,500 of the 9,400 firefighters currently battling fires in California are incarcerated. They make just a dollar an hour, but are rarely eligible to get jobs as firefighters after their release. According to some estimates, California saves up to $100 million a year by using prison labor to fight its biggest environmental problem. In September the Democracy Now! team traveled to the Delta Conservation Camp in Northern California, a low-security prison where more than 100 men are imprisoned. Incarcerated firefighters are interviewed who had just returned from a 24-hour shift fighting the Snell Fire in Napa County.

Filipino Reporter Maria Ressa on Duterte’s Targeting of the Press & How Facebook Aids Authoritarians
As Philippines President Rodrigo Duterte amps up his attacks on the free press, we speak with renowned Filipino journalist Maria Ressa about Duterte’s deadly “war on drugs,” his affinity for Donald Trump, and his weaponization of social media. Ressa is the CEO and executive editor of the leading independent Filipino news site The Rappler, which Duterte has repeatedly tried to shut down. Last week, the Filipino government indicted her for tax evasion in what is widely seen as the government’s latest attack on the website. We speak with Maria Ressa in New York City. She has received the 2018 Knight International Journalism Award and the Committee to Protect Journalists 2018 Gwen Ifill Press Freedom Award.