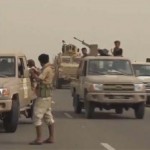 House Republicans have quashed debate on a resolution that aims to end U.S. military support for the Saudi-led war in Yemen, by sneaking a single line into an unrelated resolution about wolves.

Rep. Ro Khanna: By Blocking Yemen Resolution, House GOP Is Abdicating Its Duty to Decide War & Peace
House Republicans have quashed debate on a resolution that aims to end U.S. military support for the Saudi-led war in Yemen, by sneaking a single line into an unrelated resolution about wolves. The House voted 201 to 187 on the bill Wednesday, approving a provision that blocks the Democrats from forcing a vote on the U.S. role in Yemen under the War Powers Act. For nearly four years the United States has played a key role supporting the Saudi-led invasion, which has devastated Yemen, creating the world’s worst humanitarian crisis. The U.N. is warning 14 million Yemenis are on the brink of famine. One new study has estimated the war has killed at least 57,000 people since the beginning of 2016. Congressmember Ro Khanna, who introduced the resolution in the House is interviewed.

“He Was a Protector”: Remembering Jemel Roberson, 26-Year-Old Chicago Security Guard Slain by Police
Community members are demanding answers for the police killing of a black security guard in the Chicago suburbs, after 26 year-old Jemel Roberson was shot and killed by a white policeman Sunday. Roberson jumped into action early Sunday morning when a shooting broke out at a bar where he was working as a security guard. He was restraining a shooting suspect when several police officers arrived on the scene, and a white police officer from the Midlothian Police Department shot and killed Roberson. Witnesses said the police officer opened fire even though people at the bar were screaming that Roberson was a security guard. Roberson was armed and held a valid gun owner’s license. Avontea Boose is the partner of Jemel Roberson and mother of his 9-month-old son Tristan. She is currently expecting their second child. Lee Merritt is a civil rights attorney representing the children of Jemel Roberson.

Vermont Immigrant Rights Group Sues ICE for Monitoring, Infiltrating & “Hunting Down” Organizers
A major new federal lawsuit claims that immigration agents are targeting undocumented organizers for their activism in Vermont. The suit accuses Immigration and Customs Enforcement, the Department of Homeland Security and the Vermont Department of Motor Vehicles of carrying out a multiyear campaign of political retaliation against members of the group Migrant Justice. According to the lawsuit, Migrant Justice was infiltrated by an informant, and its members were repeatedly subjected to electronic surveillance. At least 20 active members of Migrant Justice have been arrested and detained by ICE. Will Lambek is an organizer with Migrant Justice, a Vermont-based group founded and led by immigrant farmworkers.