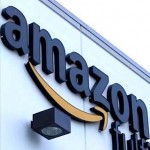 After a months-long PR campaign, Amazon has officially announced it will split its so-called second headquarters between New York and Arlington, Virginia, outside Washington, D.C., after being offered more than $3 billion in tax breaks and other incentives.

NY Politician: We Need to Block $3 Billion Handout for Amazon & Use Money to Forgive Student Debt
After a months-long PR campaign, Amazon has officially announced it will split its so-called second headquarters between New York and Arlington, Virginia, outside Washington, D.C., after being offered more than $3 billion in tax breaks and other incentives. The news prompted protests at the site of Amazon’s future office complex in Long Island City, New York, to condemn the city and state governments for showering Amazon with massive tax breaks and other giveaways to entice the company to expand into the city. As part of the deal, New York taxpayers will even build a helipad for Amazon CEO Jeff Bezos, who is the richest man in the world. Many local politicians have openly criticized authorities in New York and Virginia for backing the deals, which will create a total of 50,000 jobs. New York Assembly member Ron Kim is introducing legislation to block the deal and redirect taxpayer money away from Amazon subsidies and toward student debt relief. He recently co-wrote an opinion piece for The New York Times headlined “New York Should Say No to Amazon.”

As Jeff Bezos Earns $191K Per Minute, Why Are NY & VA Giving Amazon $3 Billion in Corporate Welfare?
Amazon has selected a pair of cities to host its new, expanded headquarters: Crystal City in Arlington, Virginia, and Long Island City in Queens, New York. Amazon’s decision came after a 14-month search that saw cities around the U.S. promise tax breaks, taxpayer-funded infrastructure and business-friendly ordinances in an effort to win what Amazon says will be $5 billion in new investment and thousands of jobs. Democratic Virginia Governor Ralph Northam called the Amazon headquarter “a big win for Virginia,” and New York City Mayor Bill de Blasio has similarly applauded Amazon’s decision. But many local politicians have openly criticized authorities in New York and Virginia for backing the deals, which will create a total of 50,000 jobs. We host a roundtable discussion about Amazon and corporate welfare. In New York, Ron Kim is a member of the New York State Assembly. He recently co-wrote an opinion piece for The New York Times headlined “New York Should Say No to Amazon.” In Washington, D.C., Greg LeRoy is executive director of Good Jobs First, a watchdog group on economic development incentives. And in Portland, Maine, Stacy Mitchell is co-director of the Institute for Local Self-Reliance. She is the author of “Big-Box Swindle: The True Cost of Mega-Retailers and the Fight for America’s Independent Businesses.”

Advocates: Trump Creating Border Crisis by Pitting Troops Against Women & Children Fleeing Violence
Defense Secretary Jim Mattis is traveling to McAllen, Texas, today to visit some of the thousands of troops deployed at the U.S.-Mexico border by President Donald Trump. Nearly 6,000 active-duty troops are currently stationed in Texas, California and Arizona, following Trump’s escalating attacks against the Central American caravan heading toward the border. Trump has warned that that number could swell to 15,000—more than the U.S. forces in Afghanistan and almost triple the number of troops in Iraq. According to some reports, the border deployments could cost $220 million, despite the fact the Pentagon does not see the caravan as a risk. Mattis’s visit comes just days after the Trump administration announced new immigration rules to deny asylum to anyone who enters the country outside of a port of entry, a move the American Civil Liberties Union has called “illegal.” Fernando Garcia is interviewed and is the founding director of the Border Network for Human Rights, an advocacy organization based in El Paso. Liz Castillo, an immigration reporter and managing editor with Neta, a community news outlet in the Rio Grande Valley, is also interviewed.