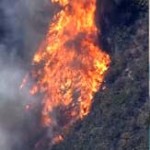 California’s Camp Fire has become the state’s deadliest fire on record, decimating the town of Paradise, killing 42 people and destroying 7,200 structures. The fires in California are so large they can be clearly seen from space.

As Fires Devastate California, 350.org Calls for Transition to 100% Renewable Energy Economy
California’s Camp Fire has become the state’s deadliest fire on record, decimating the town of Paradise, killing 42 people and destroying 7,200 structures. The fires in California are so large they can be clearly seen from space. Smoke and ash have left millions of Californians exposed to air quality rated at “unhealthy” or “very unhealthy” levels, with residents of Los Angeles, Sacramento and the Bay Area warned against spending time outdoors. May Boeve is executive director of 350 Action, who says, “We are really daunted by the reality of the climate impacts that are facing us.”

Climate Scientist Who Fled CA Wildfire: We’re Going to Keep Paying Price If We Ignore Climate Change
At least 44 people are dead and more than 200 remain missing as two massive wildfires, fueled by easterly winds and a historic drought, continue to rage in California. In Northern California’s Butte County, the Camp Fire has become the state’s deadliest fire in history, after the blaze swept through the town of Paradise, killing 42 people and destroying nearly 6,500 homes. In Southern California, a quarter-million residents of Los Angeles and Ventura counties were ordered to evacuate the Woolsey Fire—including the entire city of Malibu and parts of the San Fernando Valley. Governor Jerry Brown said Sunday that the fires were driven by climate change and that California needs to learn to adapt. Climate expert Glen MacDonald, John Muir memorial chair of geography, is director of the White Mountain Research Center and a UCLA distinguished professor. He was forced to evacuate his Thousand Oaks home due to the Woolsey Fire.

“An Incredible Victory”: Opponents of Keystone XL Pipeline Praise Judicial Order Blocking Construction
On Thursday, a federal judge in Montana temporarily halted the construction of the controversial Keystone XL pipeline, which would carry oil from Canada’s tar sands region in Alberta to refineries as far away as the Gulf of Mexico. The court’s decision will require the Trump administration to review more thoroughly the potential negative impacts of the pipeline on the surrounding environment and climate change. President Obama halted the construction of the pipeline, which is being built by TransCanada, in 2015 following mass public protests, but Trump reversed the order shortly after he came into office. Environmental and indigenous groups hailed the decision Thursday. Sierra Club attorney Doug Hayes said in a statement, “The Trump administration tried to force this dirty pipeline project on the American people, but they can’t ignore the threats it would pose to our clean water, our climate, and our communities.” May Boeve is executive director of 350 Action, the political arm of the climate organization 350.org.