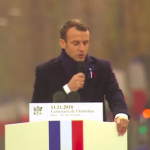 The 11th hour of the 11th day of the 11th month—that’s when World War I ended in 1918, 100 years ago this weekend. On Sunday, world leaders gathered in Paris to pay tribute to the dead, marking the anniversary of the armistice of what had been described as the “war to end all wars.”

A Century After End of WWI, Trump Snubs Peace Summit While Macron Warns of Growing Nationalism
The 11th hour of the 11th day of the 11th month—that’s when World War I ended in 1918, 100 years ago this weekend. On Sunday, world leaders gathered in Paris to pay tribute to the dead, marking the anniversary of the armistice of what had been described as the “war to end all wars.” Following the formal ceremony at the Arc de Triomphe, Macron and German Chancellor Angela Merkel attended a peace conference with dozens of heads of state, including Russian President Vladimir Putin and Turkish President Recep Tayyip Erdogan. Trump was reportedly the only one among 72 leaders to skip the meeting. Trump also faced widespread criticism for his decision to cancel a visit to a U.S. military cemetery in France on Saturday because it was raining. To find out more about the significance of the war and its commemoration, Adam Hochschild is interviewed. HE is a lecturer at the Graduate School of Journalism at the University of California at Berkeley. His most recent book, published last month, is titled “Lessons from a Dark Time and Other Essays.” His article for The New Yorker earlier this month was headlined “A Hundred Years After the Armistice.”

Emma Goldman, Eugene Debs, Jane Addams: Honoring Antiwar Resisters on the 100th Anniv. of WWI’s End
This weekend marked 100 years since the armistice that ended World War I. In a speech commemorating the anniversary, French President Emmanuel Macron cautioned against the dangers of nationalism, in comments widely viewed as a rebuke of U.S. President Trump, who has recently identified himself as a “nationalist.” Just before the summit, Macron also called for the formation of a European army that would operate without the United States. Journalist and author Adam Hochschild argues that the 100th anniversary of the war’s end is an opportunity to honor the dissenting voices against the war, including anarchist political activist and writer Emma Goldman, socialist and trade unionist Eugene V. Debs and Nobel Peace Prize laureate Jane Addams.

A Century After WWI’s End, Adam Hochschild Cautions: “Think Long and Hard Before Starting a New War”
Between 1914 and 1918, about 10 million civilians perished in World War I, and almost 10 million soldiers were killed. Another 21 million were wounded. This week marks the 100th anniversary of the celebrated armistice credited with ending the war. But the agreement, which signified German surrender, was a shock to the people of Germany, says journalist and author Adam Hochschild—and it guaranteed the continuation of a brutal wartime naval blockade that saw over 400,000 Germans die of malnutrition. A right-wing backlash in Germany followed after the armistice, leading into World War II and the Holocaust. Hochschild says WWI, like the Iraq War, holds important lessons for today’s leaders to avert another war. “Wars almost always cause more problems than they solve,” he says. “Anybody at any time should take that lesson from this first of the terrible wars of the 20th century.”

On Veterans Day, Advocates Warn Against Pence & Trump-Led Attacks on VA Healthcare
On the federal observance of Veterans Day, we take a closer look at the issue of veterans’ healthcare. On Sunday, Vice President Mike Pence wrote an article for Fox News touting Trump’s record on veterans’ health and the passage of a policy known as “Veterans Choice,” which is seen by veterans’ advocates as an attempt to drain the Veterans Health Administration of needed resources and eventually force privatization of the system. Award-winning journalist and author Suzanne Gordon is interviewed. Her new book is “Wounds of War: How the VA Delivers Health, Healing, and Hope to the Nation’s Veterans.” She recently wrote an article for The New York Times titled “By Protecting Veterans’ Health, You May Protect Your Own.”

After Former Marine Kills 12 in Thousand Oaks, CA, a Discussion on Mental Health for Veterans
On November 7, 2018, a former marine opened fire at a country music bar in Thousand Oaks, California, killing 12 people, mostly college students. Police have identified the gunman as 28-year-old Ian David Long, a Marine veteran who had deployed to Afghanistan and had a history of mental health issues, including possible PTSD. The shooting has reignited a national discussion over mental healthcare for veterans returning from war. Earlier this year, Ian Long was evaluated by mental health professionals after police responded to a disturbance at his home, where he lived with his mother—and was cleared by the specialists. For more, Suzanne Gordon is interviewed, whose new book probes the history of the Veterans Health Administration providing healthcare to U.S. veterans, generating medical innovations and healing the wounds of war.