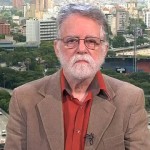 Democracy Now! goes to Caracas, Venezuela, for an update on the escalating standoff between President Nicolás Maduro and opposition leader and self-proclaimed president Juan Guaidó. Guaidó claims he is preparing to deliver humanitarian aid from the Colombian border Saturday.

This Is Not Humanitarian Aid: A Maduro Critic in Venezuela Slams U.S. Plan to Push Regime Change
Democracy Now! goes to Caracas, Venezuela, for an update on the escalating standoff between President Nicolás Maduro and opposition leader and self-proclaimed president Juan Guaidó. Guaidó claims he is preparing to deliver humanitarian aid from the Colombian border Saturday. Maduro has rejected the plan, saying the effort is part of a broader attempt to overthrow his regime. This comes as Trump’s special envoy to Venezuela and right-wing hawk, Elliott Abrams, is leading a U.S. delegation traveling by military aircraft to the Colombian border, supposedly to help deliver the aid. The United Nations, the Red Cross and other relief organizations have refused to work with the U.S. on delivering that aid to Venezuela, which they say is politically motivated. Venezuelan sociologist Edgardo Lander is interviewed. He is a member of the Citizen’s Platform in Defense of the Constitution. “This certainly is not humanitarian aid, and it’s not oriented with any humanitarian aims,” Lander says. “This is clearly a coup carried out by the United States government with its allies, with the Lima Group and the extreme right wing in Venezuela.”

“The Green Book: Guide to Freedom”: How African Americans Safely Navigated Jim Crow America
The Academy Awards take place this weekend, and one of the top contenders is the movie “Green Book,” which has renewed interest in the history of “The Negro Motorist Green Book.” So today Democracy Now! looks at a remarkable new documentary called “The Green Book: Guide to Freedom,” that offers a real look at the history of a travel guide that helped African Americans safely navigate Jim Crow America. The film premieres Monday on the Smithsonian Channel and details the violence, insults and discrimination black travelers faced on the road, as well as the pride and sense of community they felt in the safe spaces they created around the country, in the form of restaurants, hotels and vacation retreats. Featured are excerpts and an interview with writer and director Yoruba Richen, professor in the documentary program in the Newmark Graduate School of Journalism at CUNY.