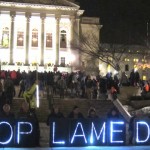 A Lame-Duck “Legislative Coup”: Wisconsin GOP Stages Last-Minute Power Grab Before Dems Take Office
Republican lawmakers in Wisconsin are orchestrating an unprecedented power grab to weaken incoming Democratic Governor Tony Evers before he takes office. In an extraordinary move that some are calling a “legislative coup,” Republican legislators worked throughout Tuesday night and into Wednesday morning to pass a sweeping package of lame-duck bills to give power to the Republican-controlled Legislature before Republican Governor Scott Walker leaves office in January. The Republican-controlled Wisconsin Senate passed a measure to limit the power of the Democratic governor and attorney general-elect and restrict early voting periods. Earlier Wednesday morning, the Wisconsin Senate and Assembly passed a bill enacting a Medicaid work requirement and limiting the incoming governor’s ability to change state laws requiring able-bodied adults without children to work in order to receive public benefits. Ruth Conniff, editor-at-large of the Wisconsin-based magazine The Progressive is interviewed.

How False Testimony and a Massive U.S. Propaganda Machine Bolstered George H.W. Bush’s War on Iraq
As the media memorializes George H.W. Bush, we look at the lasting impact of his 1991 invasion of Iraq and the propaganda campaign that encouraged it. Although the Gulf War technically ended in February of 1991, the U.S. war on Iraq would continue for decades, first in the form of devastating sanctions and then in the 2003 invasion launched by George W. Bush. Thousands of U.S. troops and contractors remain in Iraq. A largely forgotten aspect of Bush Sr.’s war on Iraq is the vast domestic propaganda effort before the invasion began. DN looks at the way U.S. media facilitated the war on Iraq with journalist John “Rick” MacArthur, president and publisher of Harper’s Magazine and the author of the book “Second Front: Censorship and Propaganda in the 1991 Gulf War.”