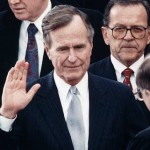 George H.W. Bush died in Houston on Friday night at the age of 94. Bush was elected the 41st president of the United States in 1988, becoming the first and only former CIA director to lead the country.

Mehdi Hasan on George H.W. Bush’s Ignored Legacy: War Crimes, Racism and Obstruction of Justice
George H.W. Bush died in Houston on Friday night at the age of 94. Bush was elected the 41st president of the United States in 1988, becoming the first and only former CIA director to lead the country. He served as Ronald Reagan’s vice president from 1981 to 1989. Since Bush’s death, the media has honored the former president by focusing on his years of service and his call as president for a kinder, gentler America. But the headlines have largely glossed over and ignored other parts of Bush’s legacy; the 1991 Gulf War, Bush’s pardoning of six Reagan officials involved in the Iran-Contra scandal and how a racist election ad helped him become president. Intercept columnist Mehdi Hasan is interviewed. His latest piece is titled “The Ignored Legacy of George H.W. Bush: War Crimes, Racism, and Obstruction of Justice.”

Remembering George H.W. Bush’s Inaction on AIDS at Home While Detaining HIV+ Haitians at Guantánamo
George H.W. Bush died on the eve of World AIDS Day, an irony not lost on many HIV/AIDS activists who remember the 41st president of the United States for his lack of action in the 1990s as the HIV/AIDS crisis raged on. Bush said little about the crisis during his years as vice president under Ronald Reagan, who didn’t even mention AIDS until the penultimate year of his presidency. Despite promises to do more after he was elected president, George H.W. Bush refused to address and fund programs around HIV/AIDS education and prevention, as well as drug treatment. Steven Thrasher, journalist and doctoral candidate in American studies at New York University is interviewed. He was recently appointed Daniel H. Renberg chair of media coverage in sexual and gender minorities at Northwestern University. His recent article for The Nation is titled “It’s a Disgrace to Celebrate George H.W. Bush on World AIDS Day.”

Interview: Bernie Sanders on Ending Yemen War, Medicare for All, Green New Deal & the Stop BEZOS Act
Hundreds of international progressive leaders gathered in Burlington, Vermont, last weekend for an event hosted by The Sanders Institute. While there, Amy Goodman sat down with independent Vermont Senator Bernie Sanders to discuss his efforts to pass a Green New Deal, raise the minimum wage and protect Social Security. He also spoke about last week’s historic Senate vote to advance a resolution he co-sponsored to end military support for the Saudi-led, U.S.-backed war in Yemen.