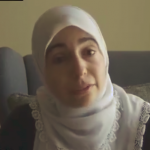 A Palestinian-American speech pathologist in Austin, Texas, has filed a federal lawsuit for losing her job after refusing to sign a pro-Israel oath. Bahia Amawi is an Arabic-speaking child language specialist who had worked for nine years in the Pflugerville Independent School District.

Meet the Texas Speech Pathologist Who Lost School Job for Refusing to Sign Pro-Israel, Anti-BDS Oath
A Palestinian-American speech pathologist in Austin, Texas, has filed a federal lawsuit for losing her job after refusing to sign a pro-Israel oath. Bahia Amawi is an Arabic-speaking child language specialist who had worked for nine years in the Pflugerville Independent School District. But she lost her job last year after she declined to sign a pledge that she would “not boycott Israel during the term of the contract” and that she would not take any action that is “intended to penalize, inflict economic harm on, or limit commercial relations with Israel.” Both Bahia Amawi and Gadeir Abbas, senior litigation attorney with the Council on American-Islamic Relations, are interviewed. He is representing Amawi in her lawsuit against the Pflugerville Independent School District and the state of Texas.

Glenn Greenwald: Congress Is Trying to Make It a Federal Crime to Participate in Boycott of Israel
Twenty-six states have laws preventing state agencies from contracting with companies or individuals aligned with the Boycott, Divestment and Sanctions movement. BDS is an international campaign to pressure Israel to comply with international law and respect Palestinian rights. However, its opponents say BDS is a thinly disguised anti-Semitic attempt to debilitate or even destroy Israel. Glenn Greenwald is a Pulitzer Prize-winning journalist and one of the founding editors of The Intercept. His latest piece is headlined “A Texas Elementary School Speech Pathologist Refused to Sign a Pro-Israel Oath, Now Mandatory in Many States—So She Lost Her Job.”

Marc Lamont Hill Speaks Out After CNN Fires Him for Pro-Palestine Speech at U.N.
Less than a month after CNN fired Temple University professor Marc Lamont Hill for giving a speech at the United Nations supporting Palestinian rights, we speak with him about the international attention his comments have received, academic freedom and why he feels it’s more important than ever to speak out about Israeli human rights abuses. Marc Lamont Hill is a professor of media studies and urban education at Temple University. He is the author of several books, including “Nobody: Casualties of America’s War on the Vulnerable, from Ferguson to Flint and Beyond.” We also speak with Pulitzer Prize-winning journalist Glenn Greenwald, whose recent piece is titled ”CNN Submits to Right-Wing Outrage Mob, Fires Marc Lamont Hill Due to His ‘Offensive’ Defense of Palestinians at the U.N.”