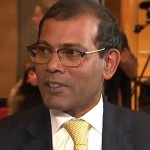 “We are not prepared to die.” Those are the words that Mohamed Nasheed, the former president of the low-lying island country of Maldives, delivered at the U.N. climate summit in Katowice, Poland, this week.

“We Are Not Prepared to Die”: Ex-Maldives President Warns of Catastrophic Climate Change
“We are not prepared to die.” Those are the words that Mohamed Nasheed, the former president of the low-lying island country of Maldives, delivered at the U.N. climate summit in Katowice, Poland, this week. In an impassioned plea for nations to overcome their differences, he urged world leaders to take decisive action to tackle climate change. Former Maldives President Mohamed Nasheed returned home to his island nation in November after two years in exile. Just a month later, Nasheed is now leading the Maldives delegation at the U.N. climate summit. DN interviews him from the U.N. climate talks.

Hundreds of Activists Stage Sit-in Against Big Polluters on Final Day of COP24 U.N. Climate Talks
Hundreds of demonstrators gathered at the U.N. climate summit in Katowice, Poland, on Friday, demanding bolder action from world leaders on climate change. The action was organized by the Global Campaign to Demand Climate Justice. Demonstrators filled the staircase inside the conference center holding banners reading “Which side are you on?” and “People Not Polluters” and “System change not climate change.” As protesters marched out of U.N. climate talks, Democracy Now! spoke with Maya Menezes, Canadian climate activist and member of the Canadian Youth Delegation with the climate justice organization The Leap. She is a migrant rights organizer with No One Is Illegal.

Extinction Rebellion: UK Protesters Are Supergluing Themselves to Buildings to Fight Climate Crisis
As protests erupt at the U.N. climate summit in Katowice, Poland, we speak with Liam Geary Baulch, part of the new movement called Extinction Rebellion that began six months ago in the United Kingdom and has now spread to 35 countries. Members are taking extreme action to fight the climate crisis, including supergluing themselves to government buildings, shutting down London Bridge and taking to the streets to sound the alarm about the impending catastrophe of global warming. They are demanding governments commit to legally binding measures to slash consumption and reduce carbon emissions to net zero by 2025.

Climate Strike: Heeding Call of Greta Thunberg, Polish Students Walk Out of Class
Fifteen-year-old Swedish climate activist Greta Thunberg has called for a global climate strike today to protest inaction at the U.N. climate summit. Greta made international headlines after she refused to go to school in August and began a School Strike for Climate. Greta made the call for today’s strike in a video posted on Twitter.