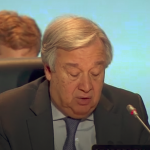 As U.N. Calls for Urgent Action on Climate Change, U.S. Seeks to Dilute Pact to Cut Carbon Emissions
U.N. Secretary-General António Guterres issued a dire warning Wednesday that nations must act now to save humanity from devastating climate change. Despite this call to action, talks here in Katowice have been hindered by the United States and the world’s other biggest polluters, who are promoting fossil fuels and focusing on reducing emissions in developing countries but not their own. Talks are supposed to conclude Friday, but negotiators have expressed little hope in meeting the deadline. “It’s really hypocritical that the United States is here, negotiating in what I would characterize as bad faith,” says Meena Raman, of the U.S. role in climate talks at COP24. “[The U.S.] is seeking to dilute further what was a very delicate treaty that was concluded.” Raman is coordinator of the climate change program at Third World Network.

A “Conference of Polluters”: How Fossil Fuel Companies Are Shaping Policy at the U.N. Climate Summit
Officials from nearly 200 countries are in Katowice, Poland, to negotiate how to implement the 2015 Paris Agreement. But so are representatives from many of the world’s largest fossil fuel companies, including a lobby group that represents BP, Shell and ExxonMobil. Just last week, The Intercept reported that an executive from Shell Oil told participants at a COP side event that Shell helped draft a portion of the 2015 Paris climate agreement dealing with emissions mitigation. This week, activists protested outside an event hosted by Shell. Among them was Nnimmo Bassey, a Nigerian environmental activist and the director of the Health of Mother Earth Foundation, who says the nonbinding 2015 Paris climate agreement was popular with politicians because polluters saw they “didn’t have to do anything that science requires.” He argues, “This is just the design and the desire of the fossil fuel industry.”

Fossil-Free Costa Rica: How One Country Is Pursuing Decarbonization Despite Global Inaction
As world leaders struggle to agree on a plan to curb global emissions at the U.N. climate talks in Katowice, Poland, DN looks at Costa Rica’s plan to go fossil-free beginning next year. It will be the first country in the world to decarbonize its economy. Costa Rica generates more than 90 percent of its electricity using renewable energy. Costa Rican officials have announced they want to host U.N. climate talks in 2019, since Brazil rescinded its offer to host the summit following the election of right-wing climate change denier President-elect Jair Bolsonaro. Mónica Araya is a Costa Rican climate activist who works with the president of Costa Rica on sustainability issues. She is the director of Costa Rica Limpia, an NGO that promotes carbon neutrality and clean energy.